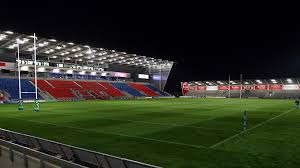 A decision been made by Salford City Council to extend the holiday on loan repayments from Salford Red Devils.

Salford City Mayor Paul Dennett formally approved the suspension of contributions from the club for 36 months, subject to an annual review.

This is on the condition the club retains its name and honours its previous agreements by playing its home games at the AJ Bell Stadium in the city.

Salford City Mayor Paul Dennett said: “Salford Red Devils is an institution in our city and a huge part of the Salford identity. I believe this decision is in the best interests of the taxpayer of Salford.

“It is concerning to hear about the continued financial difficulties faced by the club, especially in light of the important role that the club has for our city.

“We have agreed to extend the CVA on the club for three years, on annual review. Our accountants will have full access to the club’s accounts and finances and we are determined to turn things around.

“I have met with fans and hope to meet with them regularly until we turn this situation around and help the club stand on its own two feet again.”

The club’s relationship with the council has a long history. In 2013 all creditors entered into a Company Voluntary Agreement (CVA) which sets out terms for a loan to be paid back to the council over a 25 year period. This came about when the new owner took on a historic debt when he bought the club. Previously the City Mayor said it would be a mistake to change the name of the club to incorporate Manchester.

The length of the CVA has not been extended, meaning the club will still have to repay its debt over the agreed 25 years. The council agreed to this on the condition that the club pays the council £17,000 for IT support services and makes a contribution of £30,000 each year to the CVA to distribute to creditors.

Warning-Beware of the plant which burns your skin