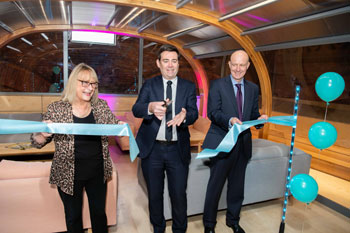 THE final piece in the development of the award-winning Ashton Old Baths has been officially opened as plans to transform Ashton town centre progress.

Greater Manchester mayor Andy Burnham visited the digital, creative and media hub on Friday (11 February) to cut the ribbon and open a new canopy area on the building’s top deck, as well as hear the latest developments for the town centre’s regeneration.

He was joined for the opening ceremony and a tour of the building by Tameside Council’s executive leader, Cllr Brenda Warrington, and executive member for finance and economic growth, Cllr Oliver Ryan.

The transformation of the historic Grade II* listed building from a derelict Victorian baths into a state-of-the-art business centre has been a huge success story. It’s supported start-up businesses and growth, particularly in the digital industry.

Its innovative design won the 2021 Global Data Centre Architecture award, beating competition from across the world. The restoration was also shortlisted for the prestigious Historic England Angel Awards in the category of “Best Rescue of a Heritage Site”, the Architects’ Journal Retrofit Awards and the Greater Manchester Chamber of Commerce Building of the Year. It’s also named as a key asset for the city region in the Greater Manchester Digital Strategy.

Ashton Old Baths was first redeveloped by Tameside Council in 2016, retaining the heritage and elegance of the building while creating a digital hub inside. The facility benefits from high-speed fibre coverage that makes connecting quick, simple and affordable.

Last year a second phase was completed with more workspace, communal areas, meeting rooms and shared kitchens created, alongside a data centre that provides businesses with access to high-tech services that many existing and new businesses to the area increasingly require.

The new canopy area is a flexible space for conferencing, meetings and additional office space that is economically designed to retain heat.

Ashton Old Baths is a crucial part of the wider St Petersfield redevelopment plan and the Ashton Innovation Corridor that will stretch through the town centre to Ashton Moss to generate high innovation growth in line with the Tameside Inclusive Growth Strategy.

It includes the £20 million Levelling Up funding that will: redevelop the former interchange site for new homes and retail, leisure and commercial space; create walking, cycling and public realm improvements, including a refurbishment of the market square; restore Ashton Town Hall.

St Petersfield will offer a modern business district which is accessible, green and designed to the highest sustainability standards and will feature residential, creative studios, cafés and communal spaces. Ashton Moss West is earmarked for an advanced manufacturing park.

Cllr Warrington said: “This final piece in the development enhances the award-winning Ashton Old Baths even further, adding another elegant space for our businesses to thrive in. The transformation into a digital, creative and media hub has been a huge success story, supporting numerous start-up businesses and helping them grow, creating jobs, boosting the local economy, preserving Tameside’s heritage and winning global awards.

Greater Manchester mayor Andy Burnham added: “The work that has gone in to get to this day is phenomenal. It was a ‘wow’ moment when I saw what had been done in this place. What has been achieved is breathtaking.

“It’s always felt to me that Tameside has really good assets, particularly here in Ashton. They just need knitting together that little bit more, and you can feel that happening now with the vision that’s been put forward.

“By bringing this incredible building together with the St Petersfield area around it, and linking it to the town centre and Ashton Moss – all of that will knock on together, drive the value of the whole up, and put Ashton more than on the Greater Manchester map, it’ll put it on the national map.”

Four homes which collapsed after a sinkhole opened up in Abbey Hey are to...