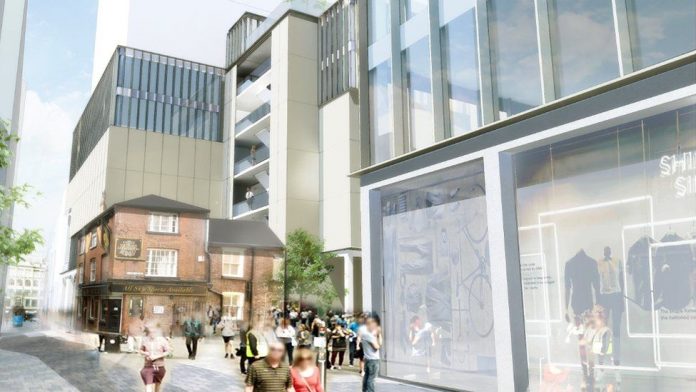 Revised plans for the controversial St Michael’s scheme in the centre of Manchester have been revealed this morning and will see the Sir Ralph Abercromby pub saved and the retaining of the former Bootle Street police station frontage.

The plans which Gary Neville says will give significant contribution” to the growth of Manchester city centre and create 1,500 jobs also now have a single, rather than a double tower which will be two metres lower than the original design and will be located on the western edge of the site away from the town hall.

It will be no longer visible from St Peter’s Square and will be cladded in a lighter colour.

Commenting on the new proposals which will be on display at Manchester Central Library Gary Neville said that the plans had not shied away from the “passionate debate” on the original proposals and addressed the issues raised “head-on”.

Tweeting earlier today he added “We believe we have the right balance this time between our ambition for the site and conservation and heritage . We have been working for 4 months with Historic England who have received the new proposal positively. We have sought address the key concerns from the first consultation whilst creating a new wonderful place for the city.

“At the same time, we have kept faith with our central vision of creating a true mixed-use destination with a signature development of the highest quality including residential living, Grade A offices, a five-star hotel, exciting retail and leisure units and world-class outdoor spaces,”

The original plans which were criticised by Historic England were put on hold earlier this year and the scheme’s original architects Make were replaced by Manchester-based Hodder and Partners.