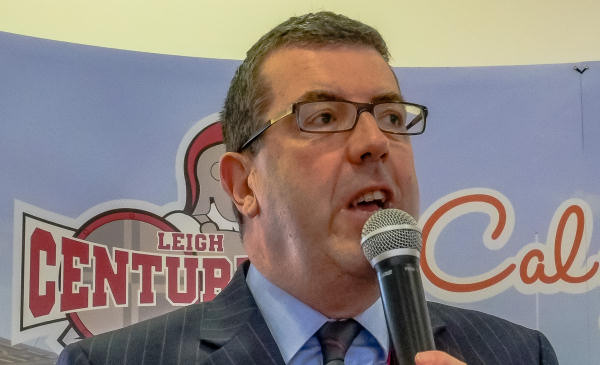 Mike Latham has been appointed the new Club Chairman of Leigh Centurions.

Latham, 57, is a lifelong Leigh supporter, the Club historian and Media and Communications Director.

He takes over the role from Michael Norris and was the unanimous choice of owner Derek Beaumont and the rest of the board to fill the vacancy.

Latham said: “When Derek invited me to take this position I was hugely honoured and delighted to accept.

“I have worked closely with Derek over the last few years and his commitment to the Club, not only in terms of financial support but the time, energy and qualities he brings is simply awe inspiring.

“We have a small but highly committed and hard working board who all share a passion for the Club and the town of Leigh. This season is a crucial one for the Club as we attempt to regain our Super League status and Derek needs all the support he can get. He will always get it from me and the other board members.

“Being Chairman is a big responsibility but it’s one I’m looking forward to taking on. I’ve supported Leigh all my life and was at Wembley in 1971 and Whitehaven in 1982. I’ve spent thousands of hours researching the Club’s history on microfilms in darkened libraries which is why I wear thick glasses and blink in daylight.

“I know most of the fans either by name or sight and no one knows more than me how much the Club means to the local people. The support of our fantastic sponsors and committed fans since relegation has been integral to what we want to achieve.”

Leigh born, Latham runs his own accountancy practice and has written over thirty books on sport history including Rugby League, cricket and football and regularly contributes articles to magazines and newspapers. He hosted a Rugby League programme on BBC Radio Lancashire for 15 years and now co-hosts the station’s cricket programme in the summer months.

The long standing Chairman of the Association of Sports Historians, he has been Chairman of Cricket for Cumberland CCC since 2013.

Leigh Centurions owner Derek Beaumont said: “I am delighted Mike has accepted the board’s request. He is the perfect figurehead for the Club, well-spoken, well-written, professional and presentable.

“I am sure he will work hard to ensure that the history created during his tenure will be a successful period for the Club.”