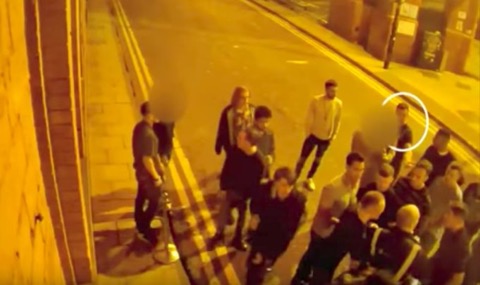 Police are trying to identify a number of people after a brawl outside The Black Dog Ballroom on Church Street in Manchester City Centre.

The fight happened between 1.20am and 1.30am on Saturday 1 July when the group gathered after half of them were denied entry.

Before long, a scuffle ensued, which then escalated into a number of men being assaulted.

Detectives investigating the incident have released moving footage of people they want to speak to.

Detective Constable Kate Grundy of GMP’s City of Manchester Team, said: “I’m particularly interested in speaking to the man circled in the footage but urge anyone else who is shown in that footage or anyone who knows them to get in contact with me.

“Violence is never the answer and should not be used as a reaction to any circumstances, particularly as it puts lives and the safety of others in danger.

“If you know the people in this footage, please call it in – you can even do this anonymously – but please, make sure you do it.”