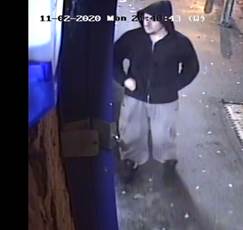 Police have released images of three men they believe may have witnessed a robbery earlier this month in Hyde.

The robbery at Tesco on Stockport Road in Gee Cross on the 2nd November saw two men armed with hammers threatened three members of staff and demanded money from the safe and tills.

A bag containing personal items and keys to a white three-door Mini parked outside the store were stolen.The offenders then made off in the Mini with cash, cigarettes and alcohol.

No one was injured.

Detective Constable Susannah Holt, of GMP’s Tameside CID, said: “Thankfully no one was injured during this robbery where staff who were just doing their job were threatened with hammers.

“They were understandably left shaken and we’re now appealing to members of the public to come forward if they recognise the men in the CCTV images.

“At this stage, we believe these men were witnesses because they entered the store around the time of the robbery.

33 year old jailed after being snareda thinking he was meeting an 11 year...