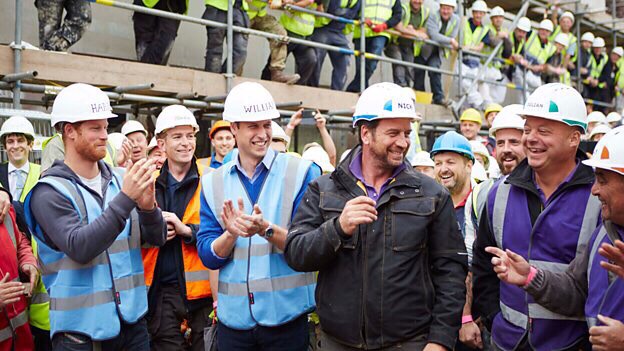 The last empty house on an East Manchester street, transformed into a community for injured veterans by the BBC’s DIY SOS programme, is to be converted into a family home for a military veteran and his children.

The DIY SOS team are returning to Canada Street in Newton Heath to complete the project they began last year.They’ll be rebuilding the empty house into a new home for Simon Flores, from Liverpool, and his three young children.

Single parent Simon had his foot blown-off whilst serving with the army in Iraq, leaving him with physical and mental challenges to overcome.

DIY SOS helped transform eight of 25 empty homes on Canada Street last year in what was the biggest project in the hugely popular programme’s 16 year history.More than nine million people tuned in to see the home transformed by an army of volunteers, which for one day included princes William and Harry.

Since the programme aired, organisations such as Manchester City Council, Haig Housing, and Kier Construction have converted a further 15 derelict properties on the street for veterans, while veterans’ charity Walking With The Wounded have opened an office on the street to support residents.

The BBC DIY SOS team returns to Canada Street on Monday 31 October. They’ll complete the overhaul of the final empty house and catch-up on the progress on veterans featured in the programme last year.

The project was the brainchild of DIY SOS presenter Nick Knowles, who was determined to find better support for war veterans, especially those struggling with physical or psychological challenges.

Nick says: “After last year’s massive success I am pleased we are returning to Manchester to continue the legacy of supporting our veterans. We have done some brilliant builds down the years but this really is the end of the greatest project the DIY SOS team have carried out. It will certainly be a bittersweet moment when we close the door on the final home knowing we’ve built some superb houses with the necessary support, employment and community services available to help our veterans now and in the years to come.”

The first stage of the build was covered in two special DIY SOS programmes last October, which scooped the National RTS Award for Best Popular Factual and Features Series.

It featured the first military veterans to move into the street. The first was triple amputee Lamin Maneh – who was injured whilst serving in Afghanistan, and who was in desperate need of special accommodation for his wife and five young children. It also featured John Borge and his young son Noah. John suffers from PTSD and urgently needed secure housing where he felt safe and supported.

Haig Housing Trust, the UK’s leading charity for veterans accommodation, has, in between the BBC projects, refurbished 15 derelict homes all of which are being let to veteran families in housing need. Haig is now working to offer low cost ownership options to veterans and secure the homes to help future generations.

Haig Housing Trust CEO, James Richardson, says: “Since the fantastic BBC DIY SOS screened last year Haig Housing Trust has been busy refurbishing the remaining derelict homes. Haig has spent over £1 million bringing 15 more homes back to use which has enabled 13 more veteran families to take up residence in the Veterans Village. The last home, a return for the DIY SOS team, will complete the whole project and house another family. Haig will continue to support these 14 families and develop new ways for these veterans to own a stake in their new homes. Haig are proud to be involved in this incredible project with the BBC, Manchester City Council and Walking With The Wounded.”

Edward Parker, CEO and Co-founder of Walking With The Wounded, says: “The DIY SOS partnership was a first of its kind and as a result of its success Walking With The Wounded has been able to launch all our services to veterans in the North West. As a result of the WWTW centre on the street residents are getting the training and employment opportunities they need in a veteran’s housing community within the existing community. We celebrate this unique partnership between public, private and charity sectors. We are hoping that in time we can replicate the WWTW elements of the Manchester project in other cities where there are so many veterans deserving a brighter future.”

Broughton House role is just the job for Laura

Manchester’s Town Hall is falling down

Design an Xmas Card for Salford