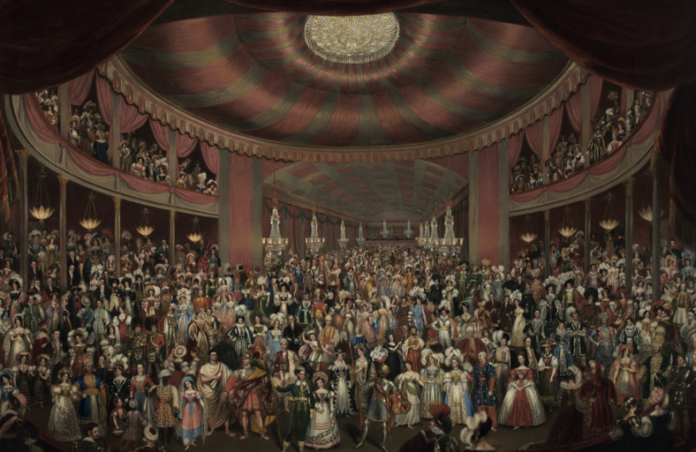 Manchester’s premier five-star hotel, The Lowry Hotel, is appealing for help in hunting down the attendees of the original Manchester Ball held in 1828, pictured in a famous portrait.

The hotel is offering complimentary tickets for its prestigious Maggie’s Charity Costume Ball for decedents of the influential Mancunians who attended the original event almost 200 years ago.

The ball on the 30th March 2019 takes inspiration from one of the region’s most glamourous happenings in 1828, when generous philanthropists from the North West attended the extravagant Manchester Ball to raise money for local charities.

The 19th century celebration was attended by 3,400 guests and the scene was captured by artist Arthur Perigal and is regarded as a social record of the ‘cream of Manchester’s society’.

The ball was reimagined and brought back almost 200 years later by the Lowry Hotel’s general manager, Adrian Ellis, alongside Jasmine Watson and Carolyn Mellor of Homes4U.

The Maggie’s Costume Charity Ball will return to the Lowry Hotel for its third year on 30th March 2019, with the new theme announced as the opulent Victorian period. This year the hotel is inviting families of the original attendees to join them as guests of honour.

Adrian Ellis, General Manager of The Lowry Hotel, said: “I was inspired by the famous oil painting by Arthur Perigal ‘A Fancy-Dress ball, Manchester’ that captures the original event. Around 300 people paid to be included in the painting, and one of them, a local man, Mr Peacock, who appears in the painting as the Knave of Hearts, won the raffle to keep it. He presented it to Salford in 1852, and it was restored in 1994.

“We are thrilled to be hosting the third ball for Maggie’s at The Lowry Hotel and to be keeping a Manchester tradition alive! We’re appealing to Manuncians to help us identify the attendees of the original ball. If you have any information or your ancestors are pictured in this paining, then please get in touch as we’d love you to join at this year’s event as our guests of honour.”

The fundraising event supports Maggie’s centres, which provide essential support to patients and families affected by cancer. The 2018 ball was attended by over 100 guests and raised over £16k for Maggie’s centres nationwide.

The event is being supported by The Royal Exchange Costume Department which cover all historical periods. A reduced rate is being offered of £45 for hire of a costume which includes all accessories, boots and hats.

The Lowry Hotel will be gifting two pairs of tickets, picked at random, to those people forthcoming with information on guests in the famous image.  Anyone wanting to supply details should email marketing@thelowryhotel.com.

Over 40,000 homes in the North West infested with vermin, survey of renters reveals