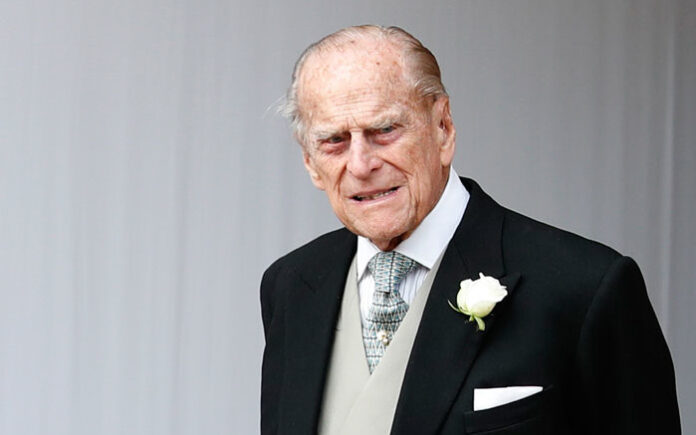 The funeral, which will be broadcast live, will take place at St George’s Chapel at Windsor Castle at 3 p.m.

As planned, it will be a ceremonial royal funeral, rather than a state funeral, with most of the details in keeping with Prince Philip’s personal wishes.

However, it has had to be scaled back because of COVID-19 restrictions. There will be no public access, no public processions and the funeral will take place entirely within the grounds of Windsor Castle.

The service will begin with a national minute of silence. At the end of the service Philip will be interred in the chapel’s Royal Vault.

Only 30 mourners are permitted because of COVID-19 rules. These will include the queen, all senior royals including the duke’s grandchildren and their spouses, and members of Prince Philip’s family including Bernhard, the Hereditary Prince of Baden, and Prince Philipp of Hohenlohe-Langenburg.

Members of the Royal Family will be wearing morning coat with medals, or day dress. The congregation will adhere to national coronavirus guidelines and wear masks for the 50-minute service.

A small choir of four will sing pieces of music chosen by the prince before his death and there will be no congregational singing. The queen will be seated alone during the service.

At 11 a.m., Philip’s coffin, covered by his standard (flag), a wreath, his naval cap and sword, will be moved by a bearer party from the Queen’s Company, 1st Battalion Grenadier Guards from the Private Chapel in Windsor Castle – where it has been lying in rest – to the Inner Hall of the castle.

At 2 p.m. the ceremonial aspect begins, and within 15 minutes military detachments drawn from Philip’s special military relationships such as the Royal Navy, the Royal Marines, the Grenadier Guards, the Royal Gurkha Rifles, the Intelligence Corps and the Highlanders will line up in the castle’s quadrangle.

The Foot Guards and the Household Cavalry will line up around the perimeter of the quadrangle.

Between 2.20 p.m. and 2.27 p.m., the royals and members of Philip’s family not taking part in the procession will leave by car for St George’s Chapel.

At 2.27 p.m., a specially-coverted Land Rover that Philip helped design will enter the quadrangle.

At 2.38 p.m., the coffin will be lifted by the bearer party from the Inner Hall.

Bands in the quadrangle will stop playing at 2.40 p.m. and the coffin will emerge from the State Entrance one minute later.

The royals in the procession including Philip’s four children – Princes Charles, Andrew, Edward and Princess Anne, along with grandsons William and Harry – will leave the State Entrance behind the coffin, which will be placed onto the Land Rover.

At 2.44 p.m., the queen, with a lady-in-waiting, will leave the Sovereign’s Entrance in a car known as the State Bentley. The national anthem will be played and as the car reaches the rear of the procession, it will pause briefly.

At 2.45 p.m., the procession will step off with the band of the Grenadier Guards leading. The Land Rover will be flanked by pall bearers.

As it moves to the chapel, Minute Guns will be fired by The King’s Troop Royal Horse Artillery and a Curfew Tower Bell will sound.

The queen’s Bentley will stop outside the Galilee Porch where she will be met by the dean of Windsor, David Conner, who will escort her to her seat in the quire of the Chapel.

The coffin will arrive at the foot of the west steps of St George’s Chapel at 2:53 p.m. to a guard of honour and band from the Rifles. Positioned in the Horseshoe Cloister will be the Commonwealth defence advisers from Canada, Australia, New Zealand and Trinidad and Tobago.

The coffin will pause for the national minute of silence at 3 p.m. A gun fired from the East Lawn will signify the start and end.

The coffin will then be taken to the top of the steps where it will be received by the dean of Windsor and the Archbishop of Canterbury, Justin Welby. As the chapel doors close, a piping party will pipe the “Carry On”.

The coffin will move through the nave to the catafalque in the quire, with senior royals processing behind.

Philip’s “insignia” – essentially the medals and decorations conferred on him, his field marshal’s baton and Royal Air Force Wings, together with insignia from Denmark and Greece, will be positioned on cushions on the altar.

The funeral service will then be conducted by the dean of Windsor. After the coffin is lowered into the Royal Vault, Philip’s “Styles and Titles” will be proclaimed from the sanctuary.

A lament will then be played by a pipe major of the Royal Regiment of Scotland and “The Last Post” will be sounded by buglers of the Royal Marines.

After a period of silence, “the Reveille” will be sounded by the state trumpeters of the Household Cavalry and then the buglers of the Royal Marines will sound “Action Stations” at the specific request of the Duke of Edinburgh, as Philip was officially known.

The archbishop of Canterbury will then pronounce the blessing, after which the national anthem will be sung.

The queen and the other mourners will then leave the chapel via the Galilee Porch.

How a Hulme gas leak led to the creation of a 24-metre school cycle...