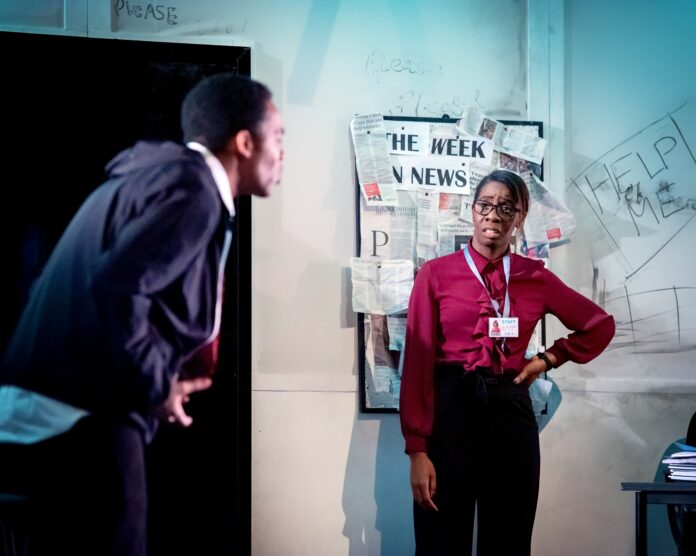 My Voice Was Heard But It Was Ignored takes the audience to the centre of a discussion that asks ‘if you see something you do not agree with, do you intervene’?

The stage debut of writer and Coliseum Supported Artist Nana-Kofi Kufuor is an interrogation of black identity for which he has drawn on his own experience growing up in Stockport with Ghanian parents and working in education with young people from a range of backgrounds.

The play was initially programmed for the Coliseum stage in November 2020, but subsequentially rescheduled due to lockdown and the coronavirus pandemic. It will now run at Oldham Library on Monday 15 & Tuesday 16 November.

My Voice Was Heard But It Was Ignored opens with 15-year-old Reece (Jelani D’Aguilar) being roughly accosted by police. His young, Black teacher Gillian (Misha Duncan-Barry) witnesses it all but doesn’t question or intervene as the disturbing scene plays out. The consequences of her lack of action erupt the following day when Gillian finds herself locked in a classroom with Reece.

“The crux of this play is how two people react to the same situation. They go on a journey, a journey a lot of people of colour go on, a realisation that where you are now isn’t necessarily where you come from,” Nana-Kofi explains.

“When working at a Pupil Referral Unit, I once had a student take a knife to stab another student. Once I’d calmed him down, we sat in the canteen, and he explained to me he wasn’t going to go quietly. The police were outside, and they took him. I saw him a few weeks later, and he asked why I didn’t help him? That rush of guilt changed to anger and quickly to sympathy as he saw me as his protector. But I knew I couldn’t do anything.”

Director Dermot Daly says: “I was really taken by the conceit and breadth of themes and ideas. Thematically it’s huge, but ostensibly it’s about the meaning and creation of identity which is something that affects us all. Neither character is who they want to be. but both appear to be trapped, robbed of agency, this perception in them and hopefully of the audience shifts quite dramatically as we progress. Worry not, there are a few gags in there.”

My Voice Was Heard But It Was Ignored runs at Oldham Library on Monday 15 & Tuesday 16 November.

Birth Trauma And How To Know If You Have It