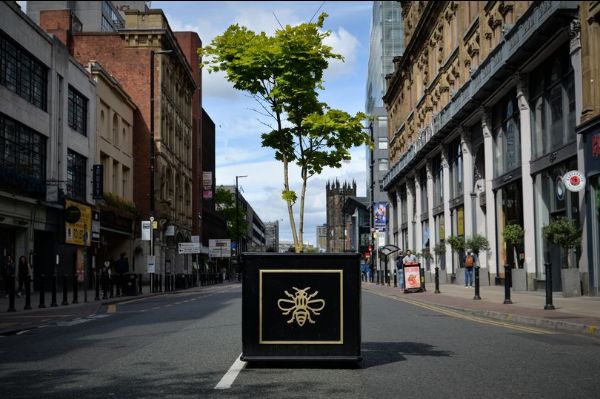 Manchester City Council have announced that they will keep the current traffic control measures on Deansgate in place, maintaining a balance between the space already given over for pedestrians and cyclists, as well as keeping infrastructure for public transport and taxis.

As the situation in Deansgate moves from a temporary scheme to an interim one, its main features will be a Bus gate and Deansgate one-way southbound between Blackfriars and King Street – buses and taxis only. Segregated cycle facilities included.

Traffic will be one way southbound between King Street west and Quay Street and there wil be a Bridge Street westbound bus gate, located west of Gartside Street (eastbound traffic unaffected).

Existing access will remain across Deansgate at St Ann Street, King Street and Bridge Stree and the Right-turn ban from Bridge Street onto Deansgate will be removed.

“The Council has a long-standing vision for the future of Deansgate and these latest measures are a positive step towards that.

“With the right changes we want to encourage more people to walk, cycle or use public transport in Manchester and by focusing on one of the most heavily used streets in the city we believe that our ambition is on clear display.”

Other changes have also been proposed including improvements to the barriers, cones and signs which have until now separated vehicles on the road. More attractive bollards, signs and road markings will be put in place.

The temporary ‘wands’ which separated cycle lanes from vehicles will be replaced with more substantial segregation which will be bolted to the carriageway.