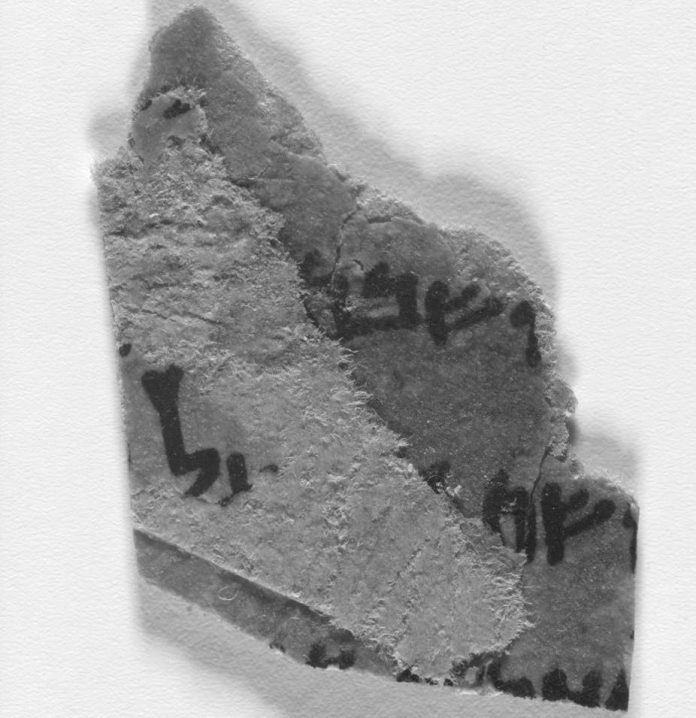 We really didn’t mean to find any missing texts of the Dead Sea Scrolls.

The 2,000-year-old scrolls were found in the Qumran caves next to the Dead Sea in the 1940s. They weren’t the only discoveries, though. Archaeological artefacts like pottery and linen were also taken from the caves, and some are now in collections around the world.

My research collaborators Dennis Mizzi, Marcello Fidanzio and I put together a research project to find and study these artefacts, and to use techniques like radiocarbon dating to understand them better.

Dennis had written his Oxford thesis on Qumran archaeology and was preparing it for a book. Marcello was co-editing the final official publications of the cave findings. I had been working on Qumran materials in private and little-known collections.

We were all interested in non-scroll materials from the caves, which had been gifted and sold by the excavators to collectors, and early photographic dossiers that recorded these discoveries. In our project, scrolls were to be considered as archaeological artefacts among the other items found in the caves.

Blank scroll fragments – or not?

In the list of the many archives and collections we planned to visit, we noted: “Further materials exist in the Reed archive of the John Rylands Library, Manchester.” We knew that this collection contained some blank fragments of scroll – the archive had belonged to Ronald Reed, former leather expert at the University of Leeds, who had been gifted blank scroll fragments after the official excavations of the Qumran caves.

The fragments had been discussed and analysed by previous researchers, and we thought they might be ideal for radiocarbon dating. In our research budget, we had £10,500 for radiocarbon and other scientific analyses for all our designated objects of interest, and £3,000 for digital photography and permissions for publications. We had nothing in the pot for multispectral imaging to reveal texts. This just goes to show how hard it is to design a budget for truly investigative research.

I visited the John Rylands Library at the University of Manchester with our researcher Sandra Jacobs. Curator Elizabeth Gow brought us the boxes of the Reed collection. We went through them to identify interesting items. When we got to Box 6, it appeared to contain a lot of random leather samples. But as she took them out one by one, Elizabeth held up a small envelope labelled “4Q22”. I said, “Hang on, this is one of the scroll fragments.” Strictly speaking it should have been in Box 1, where most of the other fragments were found. The label indicated it came from Cave 4Q from Qumran.

Elizabeth carefully tipped it out. I looked at it through an illuminating magnifying glass. Unexpectedly, I thought I saw a faint, small lamed, the Hebrew letter ‘L’. But was that an illusion, some tricky stain? After all, these pieces were gifted to Reed for study, including destructive types of testing, precisely because they were blank.

After getting to sit with Box 1 in the library reading room, I decided I should closely inspect every single fragment for any possible faded letters. There seemed some definite indications. But what to do? Since finding text was not our primary focus and we had a lot of other important work, it seemed we should just park this for the future.

We knew there were some very good results now possible through multispectral imaging. But we had no budget for it, and it was expensive. We had to use the budget as planned. It wasn’t until the end of the grant period, with other studies done, that we had enough left over to commission multispectral imaging.

We agreed to use the remaining project funds for this, and institutionally it was permitted. We wondered about taking the fragments to Israel for the study, given the Israel Antiquities Authority’s proven expertise, but Elizabeth informed us that the John Rylands Library had the capability in house.

Enter Gwen Riley Jones, the University of Manchester imaging manager. Everything listed as Dead Sea Scrolls over 1cm was subjected to multispectral study. In the end, six pieces were selected for full analysis. Of these, four turned out to have readable text, including “4Q22”. We could finally see that lamed plainly, and more besides. On one of the fragments, the word Shabbat (Sabbath) is clearly visible.

We are working with text experts to identify the fragments, and have made progress. But our work does not stop here. We are now planning further study of the Reed materials, which also include textiles, string, pottery and papyrus, to see what else these little bits and pieces can tell us, and more of these will be subjected to scientific tests and multispectral imaging. When we draw up our next budget, whatever we think we probably don’t need will be top of the list.