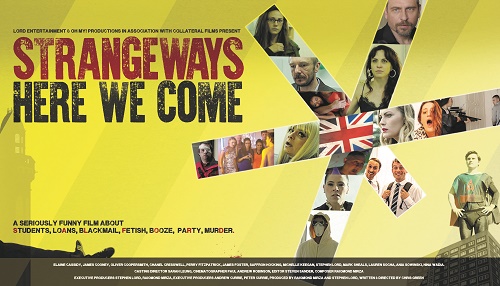 Dark comedy Strangeways Here We Come, telling the tale of a group of high-rise residents who conspire to get their revenge on a loan shark, is being shown at the University of Salford’s arts venue on September 26, followed by Q&As with members of the cast.

The film, also starring  Stephen Lord (Marcella, Penny Dreadful) Elaine Cassidy (No Offence) and BAFTA winner Chanel Cresswell (This Is England), is being shown at the University ahead of going on national release next month.

The screening marks the start of a season of public events at the 350-seat theatre featuring everything from side-splitting comedy to ground breaking dance projects.

Ayub Khan Din will give a Q&A ahead of a screening of his classic East Is East on October 25 – as part of a series of cinema nights featuring everything from family favourites like Grease and The Muppets Christmas Carol to Oscar winner The Shape Of Water.

The popular New Adelphi Comedy Night returns with monthly performances on October 2, November 6 and December 4, marking the start of an autumn of comedy.

The laughs continue with Amusical on October 3 – a celebration by the comedy world of all things West End. Hosted by comedians Jayde Adams and Kiri Pritchard-McLean, the event features five comics going up against each other to perform their favourite musical theatre song before going to an audience vote.

Kiri Pritchard-McLean returns with Rachel Fairburn as part of their All Killa No Filla national tour, finding humour in the gruesome world of serial killers, on December 9.

The Suspiciously Cheap Comedy Night on October 22 brings together a line-up including Edinburgh Comedy Award Winner Adam Riches, Luisa Omelian – creator of hit show What Would Beyonce Do? – and Jamali Maddix, as seen on Live At The Apollo.

LipService Theatre, described by The Independent as ‘the Laurel and Hardy of literary deconstruction’, bring audiences a first chance to see their new show Strangers On A Train Set on October 11 before it goes on tour next year.

The duo return for a performance of their unique Jane Austin adaptation Mr Darcy Loses The Plot on November 2.

Happenchance Theatre present Wings, telling the story of a doomed relationship between a stand-up comedian and a comedy writer, and described as a comedy about love or a love story about comedy, on November 8.

Comedian Amy Vreeke takes a frank and funny look at a life-altering disease when she performs her one-woman show The Year My Vagina Tried To Kill Me on November 16-17, talking about her diagnosis with endometriosis in an attempt to break taboos surrounding the condition.

And internationally acclaimed Quarantine Theatre bring their dance marathon show Wallflower to the theatre on October 19.

Described by the London Evening Standard as ‘lo-fi, freewheeling and rather brilliant’, the show asks its performers – and the audience – to remember every dance that meant something to them, from bopping to Top Of The Pops as a child to dancing with their grandmother who has Alzheimer’s.

The Vital Signs festival, from September 28-30, builds on a collaboration between the University’s poetry lecturer Scott Thurston and dance lecturer Sarie Slee, with a series of digital and live events.

The Watch Us Dance event on November 9 features a series of professional and commissioned dance pieces, while the Emergence Premier on Number 29 features work by the postgraduate dance company formed between the University and Joss Arnott Dance.

The season closes with some Christmas sparkle at the Big Band Concert on December 10, featuring the University’s band accompanying trumpet maestro and BBC Proms singer Georgina Jackson, who has previously worked with the likes of Nancy Sinatra, Seal and Cuban American jazz artist Arturo Sandoval.

New Adelphi Theatre Artistic Director Niki Woods said: “We’ve developed a programme of engaging and innovative work which has something for everyone.

“This season’s programme reflects the creative degrees which our students study, as well as reflecting our outlook as an inclusive institution and inviting members of the local community from Salford, Greater Manchester and further afield to enjoy.”

40 Years On Derek Jarman’s Cult Punk Film Is Remixed For The Social And...