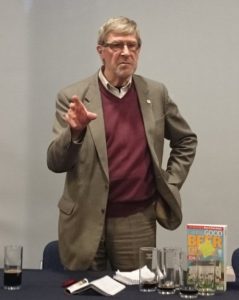 Ever wondered which shortcake to dunk in your stout? Does a digestive go with a doppelbock? Is brown ale is the perfect accompaniment to a bourbon? Wonder no more as the North’s biggest beer festival brings a set of tutored tastings next month including the unique pairing of biscuits with beer.

Building on last year’s sell-out tasting sessions, Manchester Beer and Cider Festival will give drinkers the chance to hear from three of the country’s leading beer experts. They will be running tutored tastings, suitably accompanied by generous samples of some of the 600+ ales on offer.

Kirsty Walker, Roger Protz and John Clarke will be talking about some of their favourite beer styles, showcasing the breadth of taste and history of real ale in the UK and further afield. All three have gathered reputations as entertaining writers and presenters. Their combined expertise will be available to selected audiences on two of the three days the festival opens to the public. Their subjects will range from the story of Belgian beers, the tradition of serving ales from wooden barrels, the mystique of lambic beers from mainland Europe and how beer can best be matched with biscuits.

Kirsty Walker is a North West-based beer writer, blogging as ladysinksthebooze. Recently a popular speaker at the Calderdale Beer festival, it is her first appearance at the Manchester Central venue. Kirsty has readily taken the challenge laid down by festival organisers to pair biscuits with some of the tremendous selection of beers from the UK and beyond.

She said: “Obviously the big question is – to dunk or not to dunk? I am confident that following this talk, cheese and wine evenings will be a thing of the past, and Beer and Biscuit evenings will reign supreme.”

Roger Protz is probably Britain’s best known beer writer, and edits the annual Good Beer Guide, with the 2019 edition published last month. He is an experienced broadcaster as well as author of the best-selling “300 beers to try before you die”. It would be difficult to believe you’ve not read or heard Roger, as he is prolific in his output both here and in the USA. He will be talking about the history and practice of serving beer from wooden casks.

John Clarke is well-known in Greater Manchester beer circles, contributing newspaper columns as well as editing the popular “Opening Times” magazine. Currently chair of the Stockport and South Manchester branch of CAMRA, John has an easygoing, witty and expert presenting style. He’ll be sharing his passion for some of the stronger beers available at the festival including Belgian and spontaneously fermented lambic styles.

Deputy organiser Peter Alexander said: “We are delighted three nationally-recognised experts will be dispensing wisdom and wit as well as drinks. Each speaker is selecting five beers for the enjoyment of their audiences. Demand is sure to be high for these sessions, so we recommend securing tickets early. And advance tickets make great Christmas gifts for those beer lovers you’ve no idea what to buy.”

Drink Dine and Distill under the Railway arches