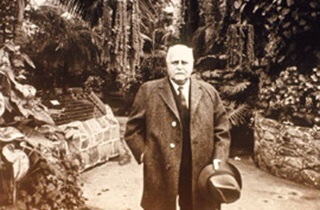 The late George Mottershead OBE, the founder of Chester Zoo was born in Sale Moor in Trafford.

His inspirational story has made him a household name thanks to the major BBC TV programme ‘Our Zoo’ currently being shown which charts one man’s personal dream of a Zoo Without Bars for all to enjoy from its humble beginnings.

Trafford Council will commemorate George Mottershead’s life and recognise his ground-breaking achievements by unveiling a blue plaque in his memory on Friday 10th October at 11.30am in Sale Moor.

George’s daughter June Williams who worked alongside her father to establish the zoo, will be there to carry out the unveiling along with the Mayor of Trafford, Cllr Ejaz Malik.

The ‘Our Heroes’ exhibition which is currently on display at Sale Waterside Arts Centre also celebrates and remembers George Mottershead for his pioneering and enterprising spirit and his bravery during World War one.

Cllr Malik said: “It is an honour to celebrate and commemorate the life of such an important Trafford resident. His vision, determination and achievements are inspirational and the placing of a blue plaque where he was born will keep his memory and achievements alive for generations to come.”

The Russian State Ballet of Siberia heads to Manchester in January