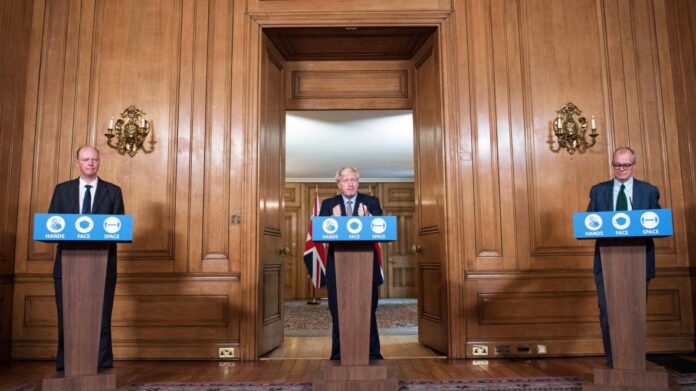 Leaked papers published by the British Medical Journal state that  ‘This is described by the prime minister as our only hope for avoiding a second national lockdown before a vaccine, something the country cannot afford.’

The cost equates to the cost of the nation’s education budget and represents a 30-fold increase in the UK’s testing capacity, with just 350,000 daily tests being carried out at the moment.

Audiences at indoor and outdoor venues in Salford will be tested on the day in a pilot programme in Salford next month, with those coming back positive being sent home and those found to be clear of the virus allowed in.

Meanwhile the Transport Secretary Grant Schapps doing the media rounds this morning has admitted that the technology for carrying out mass testing on this scale does not exist.

On top of what was supposed to be a world beating test and trace system, immunity passports and an app, some are seeing this latest advance as another pie in the Sky announcement by the Government.

Spaeking on Radio Four’s today programme, Professor Sir David Spiegelhalter, a statistician at the University of Cambridge said that such a programme could lead to hundreds of thousands of people being unnecessarily labelled as having coronavirus.

“Statisticians are just sort of banging their heads on the wall at this, because mass screening always seems like a good idea in any disease – ‘Oh yes, let’s test everybody’. But the huge danger is false positives – no tests are perfect, it is not a simple yes/no thing.

“And so you have to set a threshold that is not very sensitive, that will pick up anything that hints at being infectious. That means that such a test will always generate a very large number of false positives.

“That doesn’t matter so much perhaps if you’re just being stopped going into a theatre – the point is it is not just a matter of testing.

“And if you only have 1 per cent false positives among all the people who are not infectious, and you’re testing the whole country, that’s 600,000 people unnecessarily labelled as positives.”

Professor Neil Ferguson, whose modelling led to the decision to impose the lockdown in March, has warned that the UK should not rule out more restrictions.

The Imperial College epidemiologist told the same programme that “The measures just announced will take some weeks to have an effect, so we need to wait at this point and see how much it will flatten the curve.

“And then if that is not sufficient to bring the reproduction number below one, so the epidemic starts shrinking again, then yes, we may need to clamp down in other areas.”

Fall in coronavirus infections has slowed in England – REACT study

All nighter booster clinic to run at the Etihad this weekend