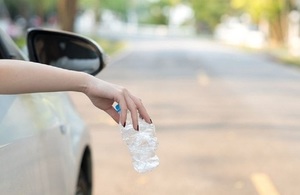 Councils will have the power to almost double on-the-spot fines for litter louts from today, Environment Minister Thérèse Coffey has announced.

The maximum on-the-spot fine for littering and graffiti almost doubles from £80 to £150. For the first time, local authorities can also use these littering penalties against vehicle owners if it can be proved litter was thrown from their car.

Keeping the country’s streets clean cost local councils almost £700 million last year. Much of this is avoidable litter says the government,and money that could be better spent in the community.

These measures come on top of cross government work to protect the environment.

On the same day, Her Majesty’s Revenue and Customs (HMRC) is implementing an extension to the landfill tax to cover unauthorised waste sites, showing that whether people are littering on a small or a large scale the penalties are high.

Today’s announcement builds on a range of new measures to tackle waste including banning microbeads, proposals to extend the 5p plastic bag charge, and plans to introduce a deposit return scheme for drinks containers.

High Polluting cars could be banned from Manchester City Centre