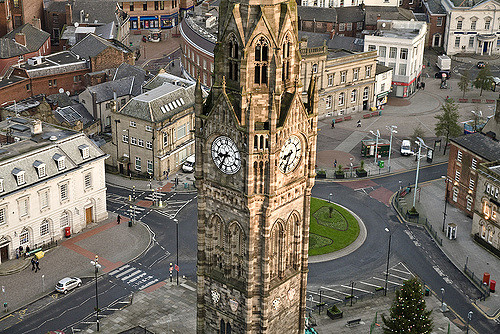 Council Leader Councillor Allen Brett has urged national broadcasters to step out of the Westminster bubble and use the iconic sound of Rochdale’s famous town hall bells on their programmes.

The newly appointed leader said the radical move would chime with public opinion and strike a chord for the north of England.

Councillor Brett has invited media chiefs from the BBC and ITV to visit Rochdale and witness the stunning sound of the bells ringing out across the town.

He said the decision to use pre-recorded chimes of Big Ben was selling licence payers short and lacked the romance and nostalgia the live gongs provide.

Councillor Brett said: “Using pre-recorded chimes is a bit of a cop out and there is no more powerful sound than the famous Rochdale Town Hall bells.

At the weekend as About Manchester reported, Northern Powerhouse Minister wrote to Tony Hall, the Director General of the BBC to suggest that the corporation broadcast the chimes from the clock above Rochdale Town Hall, which has the same “Westminster chimes” as Big Ben.

In his letter, Berry writes of a recent visit to Rochdale, where he stood in awe of the Grade I-listed gothic masterpiece.

“During my visit, I stood at the base of the tower and, as the clock struck 11 and the tower bells rang, I was struck by their similarity to those I hear so often in Westminster and on your programmes,” he wrote. “I think, due to the building’s national importance as a heritage site, it would be a wonderful opportunity if you would consider using these bells temporarily in your broadcasts.

“In addition, it would bring tremendous joy to the immediate community – and the whole northern powerhouse – to provide these iconic chimes, even if just for a limited period,”

“I would simply ask national broadcasters to get out of the Westminster bubble, come and visit Rochdale and see at first-hand what a beautiful building the town hall is.

“We hear a lot of noise from the government about devolving money and power to the regions, but not a lot of action. This is the huge opportunity to give a much needed boost to north. Let the iconic Rochdale bells ring out in living rooms across the land.”

Councillor Brett added that letters were now on the way to broadcasters outlining the merits of using Rochdale’s Town Hall gongs and inviting them to visit the town.