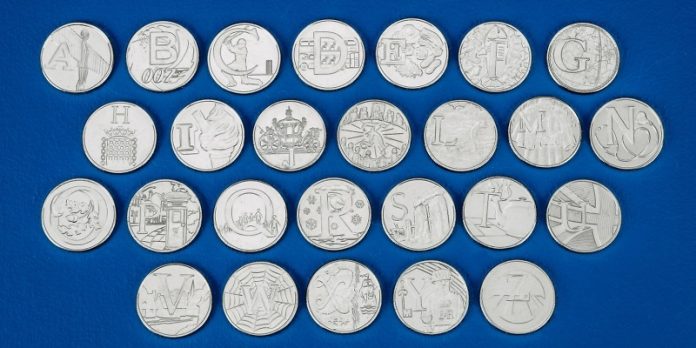 The Royal Mint has recently confirmed that 2.6m 10p coins from the popular A-Z Great British Coin Hunt collection will be released into UK circulation this month.

This is in addition to the 2.6m coins that were initially struck and released in March – essentially doubling your chances of finding one.

The latest batch of coins will be released traditionally through banks and cash distribution centres around the UK, so everyone should have an equal chance of finding one. In the past, coins from the A-Z collection have been released in more unusual ways.

The initial release in March was distributed through The Post Office network, and in June, a small number of the ‘F’ (for fish and chips) coins were given to 20 chippies around the UK to hand over to a few lucky customers.

Similarly in July, the ‘N’ NHS coin was put in the tills of 13 NHS Trust shops in the UK for visitors to collect in their change.

As for your chances of finding one and how valuable it will be,here are a number of factors that determine whether a coin is considered to be worth more than its face value.

The first is how scarce the coin is. A coin’s mintage counts how many of that coin were released into circulation. If there aren’t many coins in circulation, then they’re more difficult to get hold of – and that’s why collectors may be willing to pay more for them.

The second factor is how collectible a coin is. People may be willing to pay more for a coin to complete their collections. While this latest release of more A-Z 10p coins will mean they have higher mintages, it could encourage more people to start collecting and may make the coins more sought-after.

If it’s free from marks, scratches and grime, a collector is much more likely to want it in their collection. However, keen coin collectors are likely to be encouraged by the increased likelihood of finding something special in their change.

Essentially, a rare coin – no matter its mintage, collectability or condition – is only ever worth what someone is willing to pay for it, and being able to sell a coin for more than its monetary value is never guaranteed.

Why People Love Living in Manchester