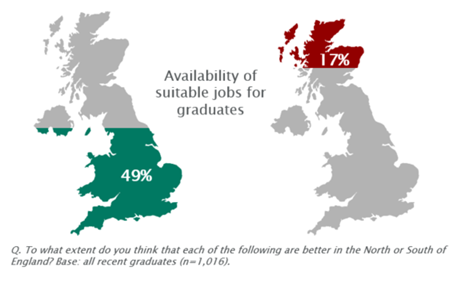 The “Northern Powerhouse” project has received large investments, but money only goes so far. With a steady stream of skill leaving, we might end up with a well-equipped Powerhouse but no-one to drive it.

New research from pollsters ComRes suggests  that 75,500 highly qualified British residents have moved from the North of England to the South, taking their skills with them in the past decade.

Amongst the factors cited by the study, the availability of jobs in the South compared to the North was the largest issue with graduates three times more likely to say that this was the main reason to leave.

Graduates also said that London still had an aura about it, with its perceived identity still having an effect.

More worryingly perhaps, 3 in 10 graduates say they don’t know what the Northern Powerhouse is, and 2 in 5 adults in the North of England say they have never heard of it.

The components of the Powerhouse project – jobs, housing, infrastructure – might be appealing, but their benefits must be communicated individually to reach the public, rather than being rolled into the “Northern Powerhouse” package.

However the survey also showed that the North can fight back.More than half of graduates say that the cheaper housing costs are an important factor in deciding where to live, and 25-35 year-old graduates are nine times more likely to say that affordability of housing is better in the North than the South.