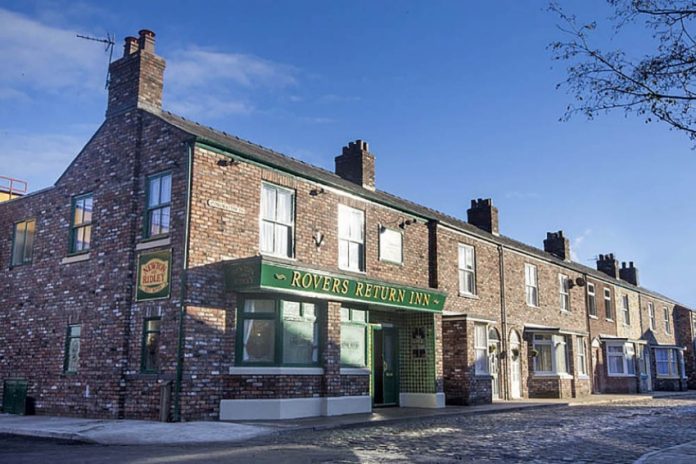 Coronation Street’s cast and crew have returned to work after an enforced production break due to the coronavirus pandemic.

Earlier today (Monday 1 June) the production team began a health and safety induction to familiarise themselves with the new protocols that are now in place throughout the studios and on the Coronation Street set. The new safety measures are in accordance with the recently issued TV production guidelines which will be observed whilst filming the top ITV soap.

The crew are also undertaking the preparatory work necessary to recommence filming next Tuesday, 9 June 2020 at the programme’s studios in Trafford, Manchester.  The pattern of recording will initially produce three episodes per week.

The return to filming will ensure the soap, which celebrates its 60th anniversary in December, stays on air in July. The new episodes will be scheduled following the instalments recorded earlier this year before the coronavirus pandemic halted production.

New safety measures, implemented to make filming possible, include a fixed cohort system with crew members designated to a specific studio or the Coronation Street exterior lot. The filming units will be maintaining safe social distancing with cohort managers in place to ensure this takes place. Cast and crew will have their temperatures checked on a daily basis by an external company, who are specialised medical advisors.

Intensive cleaning and sanitisation of areas where filming is taking place will occur on a daily basis, crew members will use their own assigned equipment, props will be sanitised with the design team working at a safe distance, make up and costume will work remotely with members of the cast and office staff will continue to work from home to ensure fewer people in the building.

Members of the cast and crew who are over the age of 70 or have an underlying health condition won’t be on set in the initial period of filming. For those members of cast and crew who fall into a Clinically Vulnerable category, we will follow an individual risk assessment process, which will enable them to return to work if it is safe for them to do so.

“Getting to this point has taken a huge amount of work and goodwill from a huge number of people, not least our cast and crew. With the peak past, all indications are that the time is right for a return to filming. And with the extensive protocols we have put in place, we have made our workplace as safe as possible. I’m sure our audience will appreciate having the show they love continue on air. For many who have written in it is a vital escape from all the fears and stresses this virus brings in its wake.”

“The whole team at Coronation Street has pulled together to generate an ingenious, intricate set of protocols, to allow filming to restart as safely as humanly possible. We are really pleased to able to resume making the nation’s favourite soap at a time when people need the reassurance of their regular Corrie fix more than ever. Safety remains our number one priority and we are under no illusions about the challenges still facing us and the nation as a whole. However, I can assure viewers that Corrie’s ever-present humour and brilliant storytelling will be there in abundance in the episodes due to begin filming next week and beyond.”