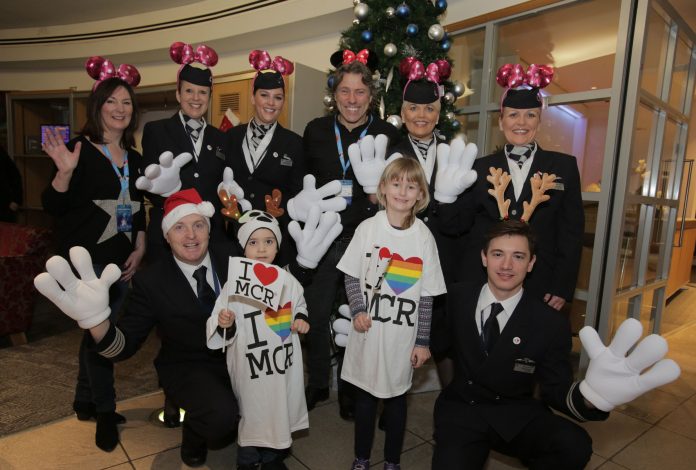 Families affected by the Manchester Arena attack will have a magical Christmas day out with one of the country’s funniest men when they jet off with British Airways from Manchester Airport to Disneyland Paris with John Bishop today (December 19).

Some of the youngsters who were at the Arena, or were affected by the events in May, are being treated to a day to remember with Liverpool comedian John and some of the cast from Chester-based soap Hollyoaks.

They will be welcomed on board a special early morning Christmas charter flight from Manchester Airport to Paris where they will be met by two more famous faces, Michelle Keegan and Mark Wright,  for a fun-filled day at Disneyland Paris.

This is the fifth time British Airways and Disneyland Paris have teamed up to organise a magical day out, but it’s the first time the flight has operated from Manchester Airport.

The trip is part of British Airways’ celebrations to mark the airline reaching a landmark £17 million raised for Flying Start, its global charity partnership with Comic Relief since 2010.  The money raised has helped Comic Relief fund projects in the UK and around the world, including the Youth Factory Zone in Manchester who are also sending 10 youngsters on the trip.

Mary Barry, British Airways’ community investment manager, said: “We wanted to give some of the families a Christmas day out, to have fun and meet some of our celebrity ambassadors.  We are very grateful to Disney for agreeing to work with us once again and to all the celebrities for giving their time to come with us.”

“The arena attack touched so many people back in May and everyone at Manchester Airport hopes the families have an incredible day at Disneyland Paris.”

British Airways and Disneyland Paris have been working with the Red Cross and Love Manchester to identify which families to take on the trip.

Community outreach and charitable giving has been a priority activity for Disneyland Paris since the resort opened in 1992. Disney magic is shared through the Disney VoluntEARS programme, whereby employees donate their time and talents to others through outreach events. In total, 755 Disney VoluntEARS gave over 4,332 hours to community service in 2017. The same year, Disneyland Paris offered its support to more than 300 different European associations, with over 1,000 community outreach events organised and supported every year including onsite day events, wishes granted to children, and visits to medical centres.

Annabel Altmann, Senior Manager of Disneyland Paris Corporate Citizenship, said “We are proud to be partnering with British Airways for a fifth year in a row, giving over 50 people from Manchester a fantastic day trip before Christmas and helping to support Flying Start.”