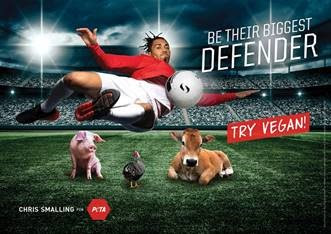 Sinking a deft mid-air kick to shield a group of animals, Manchester United defender Chris Smalling stars in a brand-new PETA campaign that proclaims, “Be Their Biggest Defender. Try Vegan!”

In an accompanying video, the footballer discusses what led him to embrace vegan eating, saying, “I realised how brutal [animal agriculture] is to animals, how unnecessary it is to us, and how damaging it is to the environment.”

He also talks about some of the health benefits he has experienced since cutting meat, eggs, and dairy out of his diet, saying, “I had a lot of tendinitis in my knee, and then once I went fully vegan, all those symptoms just dropped away.”

PETA – whose motto reads, in part, that “animals are not ours to eat” – points out that going vegan would give football fans the opportunity to enjoy many more matches, as cutting out meat, eggs, and dairy lowers our risk of suffering from heart disease, diabetes, cancer, obesity, and numerous other life-shortening health concerns.

Each person who goes vegan also dramatically reduces his or her carbon footprint – and spares nearly 200 animals every year daily suffering and a terrifying death in today’s meat, egg, and dairy industries.

Smalling previously appeared in a PETA campaign warning people of the dangers of leaving their animal companions in hot cars.

Comedian had accreditation for the conference say Greater Manchester Police