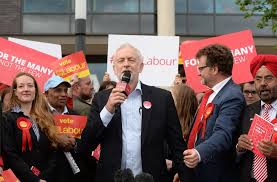 The Labour leader Jeremy Corbyn has set out his ten goals for a Labour Government.

In a speech in Telford morning, Corbyn set out ten goals on which the public could judge a Labour government after five years in power:

He promised that they would eradicate in-work poverty, end rough sleeping and foodbank dependency for ‘proud women and men’

He would give 1.4 million elderly ‘the help they needed.

Labour would also reduce primary school classes to under 30 pupils, and having ‘unleashed a green industrial revolution’.

Labour to close the skills gap with 320,000 new climate apprenticeships in its first...