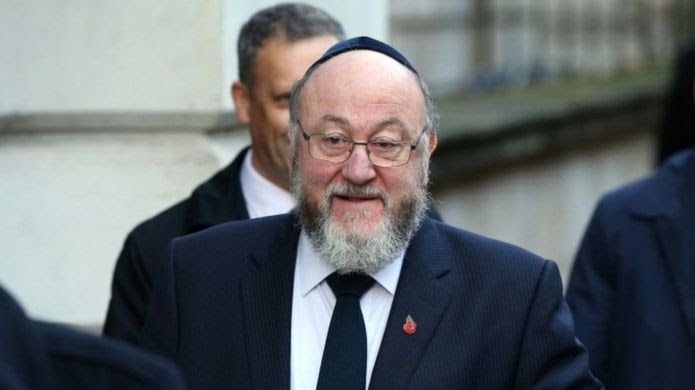 Ephraim Mirvis says in an article this morning that the poison of antisemitism “sanctioned from the top” has taken root in Britain’s Labour Party,

In an article for The Times today, the Chief Rabbi says that the Labour leader’s claim to have dealt with all allegations of antisemitism is “a mendacious fiction” and the way that the party has handled the claims is “incompatible with the British values of which we are so proud”.

Labour, he says, can no longer claim to be the party of diversity, equality and anti-racism. Its record on antisemitism in opposition, he says, left him asking: “What should we expect of them in government?”

The Orthodox Chief Rabbi of Great Britain and Northern Ireland – who is the spiritual leader of the United Synagogue, the largest umbrella group of Jewish communities in the country – says raising his concerns “ranks among the most painful moments I have experienced since taking office”.

The question I am now most frequently asked is: What will become of Jews and Judaism in Britain if the Labour Party forms the next government? This anxiety is justified,”

The article is published on the day that Jeremy Corbyn, Dawn Butler and Diane Abbott will launch Labour’s most ambitious Race and Faith Manifesto

In it the party pledges the creation of an Emancipation Educational Trust to ensure historical injustice, colonialism and role of the British empire is taught in the National Curriculum;

It will extend pay gap reporting to BAME groups to tackle pay discrimination based on race and establish  a Race Equality Unit based within the Treasury which will review major spending announcements for its impact on BAME communities;

Full list of election candidates for Trafford,Tameside and Stockport

Full list of General Election candidates for Manchester and Salford