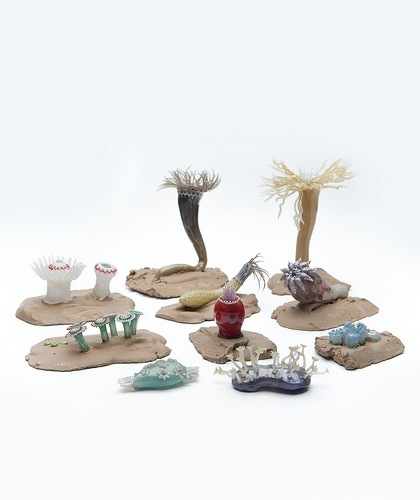 Full fathom five thy father lies;
Of his bones are coral made;
Those are pearls that were his eyes:
Nothing of him that doth fade
But doth suffer a sea-change
Into something rich and strange.

The ancients believed that coral was created by the blood from the head of the mythical Medusa spilling onto seaweed.Today we know that it is minute organisms which are at risk from small changes in the temperature of the seas around the world,a timely reminder of the threat of climate change.

“According to a recent authoritative report,”says Dr Nick Merriman, Director of the Museum, half of the world’s coral reefs have been destroyed in the last 30 years, and if we do not take action immediately to reverse this decline, we will see all of them disappear before the end of the century. This exhibition is timely by showing the beauty of coral, both in nature and in the ways it has been used artistically, and what we risk losing if we stand by while it is destroyed”

Coral is not just to be found in warm tropical sees, the exhibition’s curator Dr Marion Endt Jones reminded me as she showed me around the exhibition, one showcase catalogues the thirty seven species ingenious to the waters around the United Kingdom, many from the nineteenth century collection of Sydney Hickson, Beyer Professor of Zoology at the university’s forerunner Owens College.

The exhibition also include commissions of new works from the internationally renowned artist Mark Dion and the Lancashire-based textile artist Karen Casper, as well as a large-scale community engagement project, Manchester’s very own Crochet Coral Reef as part of the worldwide Crochet Coral Reef project created by the Institute For Figuring.

The displays include a plethora of fascinating and beautiful objects, telling a story about biodiversity and the importance of marine environments and brings attention to coral’s fascinating natural, scientific characteristics; the diversity of its shapes and patterns; its uses in different cultures and contexts; and the urgency of marine habitat protection.

In past times, coral was seen as a talisman, believed to ward off the evil eye and many of the exhibits show its use in magic and amulets.Even countries far from the sea such as Nepal honoured coral.

In Victorian society, it was a fashionable item used in jewellery.The exhibition features a decorative parasail and a crown fashioned out of the organic creatures on loan from the Victoria and Albert museum.

Coral was a popular material in cutlery, it was believed that if food was tainted with poison, it would change colour.The collection also features the coral broach, immortalised in Picasso’s picture of Gertrude Stein, fashioned by her brother Leo.

The exhibition is curated by Dr Marion Endt-Jones, British Academy Postdoctoral Fellow in Art History and Visual Studies, University of Manchester. She explained how the exhibition is the culmination of a three year project:

“Manchester Museum, as a multi-disciplinary university museum, presented itself as an ideal venue for giving a public outlet to my research on the cultural history of coral as an organism, material and symbol. The exhibition hopes to illustrate what rich and diverse cultural tradition we put at risk by polluting, overfishing and acidifying the world’s oceans.”