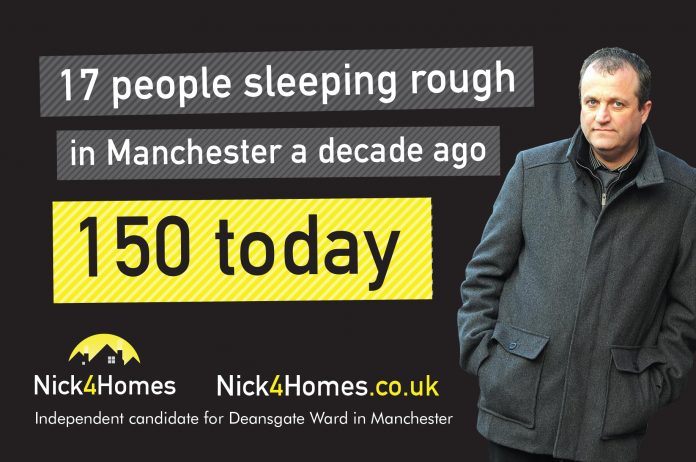 Manchester now has a reputation a City Centre to come and beg, giving money and food only makes the situation worse and the strategy of building hostels and shelters on its own will not work.

We should be moving beggars on and not doing something because you will get criticised on twitter is political cowardice.

Controversial perhaps but one man believes the status quo can’t continue and wants to get elected onto the City Council this spring to try and change.

Nick is the Chief Executive of the multi award winning Manchester based charity Mancunian Way.

The charity was formed in 2011 as a direct result of the riots that summer.Nick was working for Manchester Council’s crime and disorder team at Bootle Street Police station specialising in early prevention work with young people.

Given the opportunity to take redundancy as the council began to cut back on its services after the coalition local authority spending cuts, he decided to take the opportunity to carry on the work he had been doing for the past years.

Seven years on the charity employs seventeen people and works across Greater Manchester as well as recently starting a new project in Hackney East London.

Three years ago, Nick looked out of the window of where he lives just around the corner from Deansgate and saw the people outside sat down, begging, homeless.

Discussing with his partner, he believed that the team he had in place at the charity could do some good in this area.

“If we could walk up to a group of teenagers in a pitch black park at 10.00pm and have a laugh with them after fifteen seconds, then sitting down in the day asking a homeless person what help they wanted isn’t hard to do.”

So back in 2015, some of his team started doing just that, finding out what the problems were which would ultimately become the project Change for Good.

The clue says Nick is going out and building up a relationship over time, it can often take many months, asking what help they want straight away wont work because they don’t trust you, they don’t know you, they have had bad experience of the council, the police and other agencies.

After a rocky start, it began to work adds Nick.”Our philosophy is that we don’t own people”

Last year they got forty eight people off the streets on a budget of £20,000 in the City Centre.At any one time there are between 100-150 people on the city centre streets so it is a small proportion.

Nick says that there has been a ten fold increase in just ten years and believes that the approach needs to change.” It makes no difference what we or any other charities do, because the problem is still getting worse”

The only agency that can make a difference he believes is the council and he wants his voice on it.

“It needs a new vision, it needs some new energy and it needs some new passion….It’s good at managing the status quo……but is not good at new projects, new ideas, new ways of working and thinking outside the box”

So to the crux of the matter, what needs to change.

We need to understand the problem,Manchester is a magnet for the homeless but they were homeless elsewhere before they came here.

It goes back to 2010 and the start of austerity says Nick, small support charities had their funds ended, council spending cuts saw a drop in services especially around mental health, half way houses.Then came a tightening of the benefits system, tighter sanctions which Nick says was needed but falls disproportionately on those that cannot cope.

In Manchester specifically the council cut the street warden service in 2011. These were the people who fined you for dropping litter but they also moved on beggars.

“Around seventy per cent of the people begging are not homeless” says Nick, “they have accommodation but they obviously need help in their lives if they are prepared to sit on the streets and beg and spend it all on drugs.”

The general public saw the problem and did the wrong thing in giving them money, food and blankets though for the right reasons.

Nick says that is a controversial thing to say, ” some of these people are the nicest around but what they need to do is not to enable people to live on the streets not making their life slightly more comfortable on them.”

A good illustration is that his charity arranged for seven people last week to go to accommodation in North Manchester, only two turned up, the other five decided that they wanted to stay on the street

There are three specific things that need to happen.Prevention,early intervention and enforcement.

Prevention is about stopping the people coming to the centre to beg.These people are not usually homeless but they will become homeless over time, they are damaging their health and their social situation.

For those who believe this is a personal choice, Nick says we have a responsibility to stop this happening as a compassionate society.It could be, Nick accepts, be as draconian as speaking to the benefits agency and reporting them.

Early intervention is about reaching those that are leaving on the streets, making sure that there are outreach teams in place, building up relationships and taking “baby steps”. It’s no use just going to them and asking them whether they want accommodation.

Nick relates the story of a homeless man who refused any help until he happened to mention that he suffered from terrible toothache.They put him in touch with the dental hospital where they removed the tooth. It took another three months but finally they got him into accommodation. He lasted just four days and then after another two months he returned and a year on he is still there

Then there is enforcement. “Nobody wants to enforce anything in the City Centre because it is politically incorrect”.

“Not doing the right thing because you get criticised on twitter is cowardice.”

Perhaps even more controversially Nick feels we need to stop the Facebook groups who are organising food handouts in the City Centre.

It’s going to take some political courage so can Nick succeed?

“If you are unhappy with the way things are in Manchester,don’t vote for the people who have been in power because all you are going to get is more of the same.The more that as democratic voters we change our allegiances and vote different people in and out the more politicians will start paying attention to what we want and will know that they have to deliver.”

“We live in a Red Labour City, it has been for decades but we wonder why things don’t change”