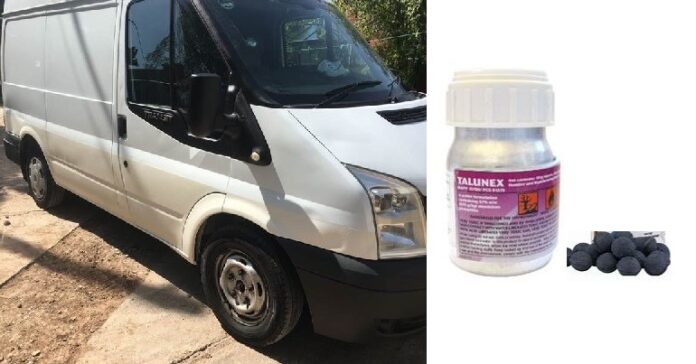 The van contained Talunex – an Aluminium Phosphide-based chemical which is used to control vermin. Talunex is very toxic if swallowed and emits a very toxic gas upon contact with water and acids. Talunex should only be handled by specially trained operators. It is in tablet form and the capsules are light grey, gardenpea-sized spheres with a seam around the centre. The tablets were last known to be stored in a grey aluminium box.

An investigation is underway.No casualties have been reported and no
arrests have been made.

Superintendent Rebecca Boyce, of GMP’s City of Manchester district, said: “The removal of these hazardous materials from the van is incredibly concerning but I would like to reassure members of the public that a major investigation is underway to find and safely recover them.

“The person/ people who removed the Talunex from the van probably did not know how very toxic the chemical is. I appeal directly to them to contact us or Crimestoppers, anonymously, and share the location of the Talunex so that specialists can safely recover it.

“I must stress that the Talunex should not be touched, sniffed or eaten. If this happens, please seek medical assistance immediately.

“I also appeal to members of the public to be alert and to dial 999 immediately if they have seen or do see anything which may be the Talunex or any of the other hazardous materials which have been removed from the van. Do not touch, sniff or eat it.”

Arrest made after Prestwich shooting