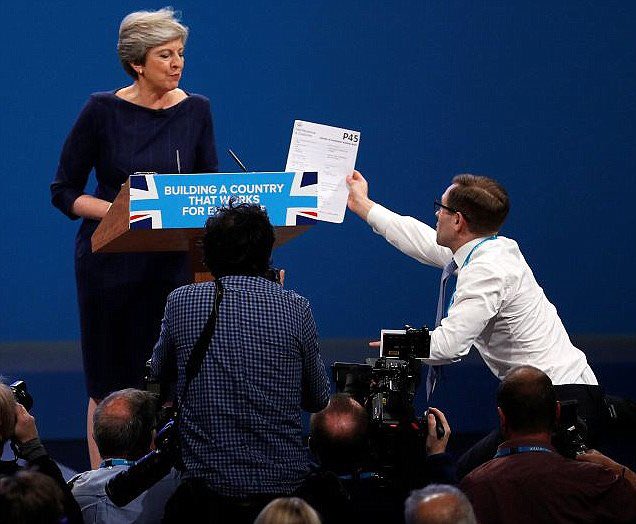 The Comedian  who handed a P45 to the Prime Minister during her speech saying ‘Boris asked me to give you this’ had ‘legitimate accreditation’, according to Greater Manchester Police.

Lee Nelson, whose real name is Simon Brodkin, made it to the front of the room handing the piece of a paper to the Prime Minister before being led away in handcuffs.

Afterwards Mrs May quipped she was “just about to talk about someone I’d like to give a P45 to and that’s Jeremy Corbyn” – to laughs and applause from the crowd.

Brodkin abandoned his medical career to pursue comedy full time and has played a number of practical jokes during his career, including him going onto the pitch as “Premiership footballer” Jason Bent to join Manchester City’s warm-up ahead of a game, and infiltrating a press conference given by then-Fifa chief Sepp Blatter in Zurich and showered him with fake banknotes shouting “Sepp, this is for North Korea in 2026”.

Last year he pranked Donald Trump at the reopening of the Trump Turnberry golf resort. Mr Trump was about to make a speech on the podium when, “Lee Nelson” interrupted him and gave out swastika golf balls to the crowd.