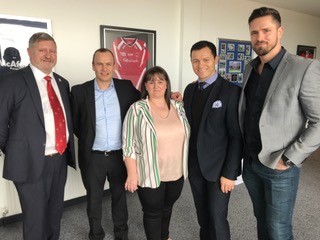 Following on from the success of their first networking event, Salford Red Devils’ new business club, Club 13, has announced the details of their second event. Aptly held on April 13th, the event will ‘tackle’ media rights and the role they play in professional sport.

Dave Woods has worked for the BBC for almost 30 years in radio and television. Working as the BBC’s main TV commentator for Rugby League since 2009, he is uniquely qualified to discuss the role of the media in the sport.

Speaking on April’s event, Andrew Rosler, founding director of SRD Holdings, said: “We are delighted to be holding the second Club 13 event at Media City, having such a hub of creativity on our doorstep is a huge asset to the city.

“Club 13’s first event was a huge success and it made perfect sense to incorporate the rich opportunities in Salford as part of our next event. Media Rights are often discussed along with their million pound price tags. Club 13 is in a unique position to have industry experts on our doorstep to discuss how the industry is changing and what the future might look like”.

Club 13 will hold their second monthly event on the 13th April, at Social 7, starting from 1pm – The Landing at Media City. Please see website for more details club13.biz.

UK must take back control of its domestic economy to move out of the...

Booming consumer bubble is about to burst say Credit Agency