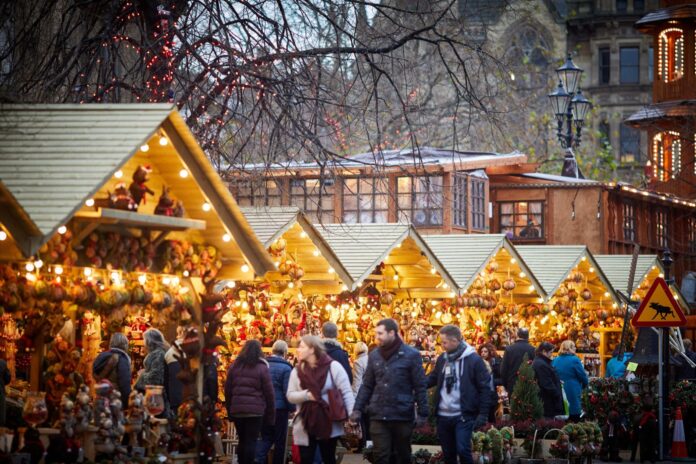 Wooden huts with twinkling fairy lights, festive hubbub, and the aromas of roasted chestnuts and glühwein – this picture-postcard setting is recreated annually across UK towns and cities in December. This year, however, most Christmas markets have been cancelled, meaning that 2020 will be a year without urban festive cheer.

But even before the pandemic, Christmas markets in the UK were at a crossroads – despite their growing popularity and economic relevance. Rising costs, concerns over authenticity and safety issues looked set to change how we experience these markets.

Our research has examined the rise of Christmas markets to their current status as global cultural commodities. Their adaptability across historical and social contexts, as well as their ability to incorporate different cultural meanings, has enabled Christmas markets to thrive over the centuries. Now, though, Christmas markets will have to continue to adapt – responding not only to the COVID-19 pandemic but also to concerns over cost, safety and authenticity.

Christmas markets were first recorded in medieval Germany. They marked the pre-Christmas season, and provided a space in which strict social hierarchies disappeared. Peasants and farmers could purchase boots, housewares and equipment, while high society could pick up handcrafted jewellery, toys, wigs or wood-turned items.

By the 19th century, though, the rise of department stores had made the markets less profitable. They became rowdy fun fairs and fell into disrepute.

Throughout the 20th century, consecutive German governments attempted to reinvigorate Christmas markets. Nazi Germany – and later the German Democratic Republic (East Germany) – used the markets’ ability to cater to a variety of tastes and needs to serve the parties’ respective political, social and cultural purposes.

In particular, they were intended to increase patriotism and social cohesion. The return of the Christmas market to Nuremberg in 1933 was marked by a grand opening ceremony, which promoted nationalism and the celebration of German traditions.

The first German-format Christmas markets in the UK were started in Lincoln in 1982, and in Birmingham in 1997. They reflected a wider trend: many European cities saw the success of Christmas markets in Germany, and began hosting their own. Since then, this format has successfully travelled the globe, marking the Christmas season and enhancing community spirit.

Now, Christmas markets make a significant contribution to the UK’s winter economy. They attract visitors from out of town, create temporary jobs and increase sales for local shops and cafés. Over the last 35 years, they have grown in number, size, duration and footfall.

In Manchester, the market has gone from a few stalls to over 180 in recent years. Birmingham alone hosted 5.5 million visitors in 2014. Estimated visitor spend at Christmas markets has doubled between 2015 and 2017, reaching a total amount of £500 million. Markets in the UK have become travel destinations alongside their European counterparts.

However, the markets are not without their critics, and a range of factors meant that – even before the pandemic – the markets were set for change. Visitors have criticised their lack of authenticity, complaining over the mass-produced Christmas decorations and gifts, and fairground rides dominating the markets.

Christmas market traders have contested increasingly unaffordable pitch fees. The dynamics between traders inside and outside the market have also generated tensions with city councils. Brexit poses further difficulties to organisers and city councils who are already expecting that exchange rates, import and export regulations and administrative burdens will negatively affect the participation of operators and traders from the European Union.

Safety has also been a concern after the terrorist attack at a Christmas market in Berlin in 2016. Markets such as those in Birmingham and Manchester have increased their emphasis on security, which restricts free visitors’ access and changes markets’ aesthetics and atmosphere.


This year, COVID-19 means that German-format Christmas markets will be largely absent from the festive calendar. They relied on international traders and hundreds of temporary workers, explaining their postponement until next year. Some Christmas markets that showcase local artisans and crafts have moved online, such as those normally held in Bath and Oxford.

A few – such as in Cardiff and Aberdeen – will go ahead, following stringent health and safety measures. They will emphasise activities that do not require interaction, such as watching the Christmas lights switch-on, rather than socially shared experiences.

New virtual markets have emerged as platforms for artisan makers, supporting small businesses during COVID-19 restrictions. People might also recreate Christmas-market themed parties at home, or via Zoom, with friends and family. These adaptations will provide some experience of festive cheer. However, they will not be the publicly and socially shared experience that has been part of Christmas markets since their inception.

Although we don’t know what life after the pandemic will hold, it is likely that some of this year’s adaptations – such as online presence, promoting local over international traders and prioritising safety measures – might become permanent features of the Christmas market format. They respond to pre-pandemic concerns as well as COVID-19 restrictions.

We believe that UK city and town centres will be transformed again in years to come. Christmas markets will return, stemmed from people’s desire for a socially shared festive experience. Their survival will result, once again, from the ability to adapt to changing times and circumstances.