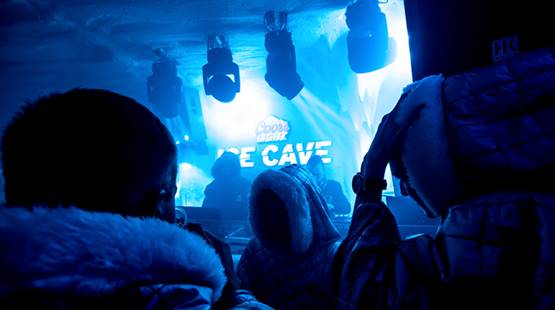 Coors Light has announced the arrival of the Coors Light #IceCaveRave in Albert Square, Manchester, from 15th – 24th September 2017.

Bringing an ice cold rave to the city’s freshers week, the Coors Light Ice Cave is set to be the coolest bar in Manchester.

Creating the optimum environment to enjoy an ice cold Coors Light, ticket holders will be met by a Coors Light arctic explorer, fresh from the Rocky Mountains, who will equip them with thermal capes expertly designed to withstand 30 minutes in the chilly temperatures.

Visitors can literally ‘chill out’ with a refreshing bottle or pint of Coors Light, and the more adventurous explorer can choose from a range of Coors Light cocktails.

Ensuring the Ice Cave has the freshest sounds from the underground music scene; Coors Light is continuing its partnership with Mixmag.

On the opening night, Mixmag will be in the heart of the city bringing DJs from the underground scene to the Ice Cave. Following the success of last year’s competition, Coors Light will be launching DJ Quest for the second time in partnership with the magazine.

The competition welcomes up and coming DJ talent to compete to win sets at venues around the world, including Ibiza and London.

Last year’s winners WondermanDJ, WeeDot and Sean Claude went on to support Bonobo at his sell out Mixmag Live show at London’s Village Underground and perform at an #IceCaveRave in the Alps.

And if guests are unfamiliar with the decks but fancy learning a new skill, DJ masterclasses will be held at the Ice Cave to encourage anybody to have a go.

Those who prefer to be on the dance floor can rave the night away with friends and capture moments in the #IceCaveRave GIF booth, creating their own moving image during their quest for ice cold refreshments.

Bookings open next week, and general admission to the Ice Cave is free. It is strongly advised to pre-book places on the Coors Light Website.