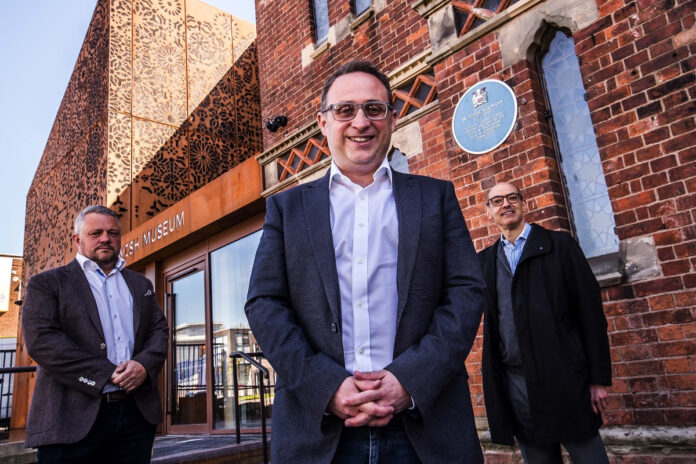 After 10 years and a multi-million redevelopment and reopening, Manchester Jewish Museum Chief Executive Max Dunbar and Chair of the Trustees Andrew Singer QC will step down from their positions to allow for someone new to build upon the success of the new museum and to lead the organisation during the next stage of its journey.

Max Dunbar will be stepping down as Chief Executive at the end of December after over 10 years at the museum. He will be moving to a new position in the Development Team at the University of Manchester, building upon his fundraising success at the museum to support the fundraising for the university’s major cultural institutions including Manchester Museum, John Rylands Research Institute and Library, Jodrell Bank Discovery Centre and The Whitworth.

Andrew Singer QC chaired his final trustee meeting in October this year before stepping down after supporting the museum over 14 years as one of its trustees, and 9 years as Chair.

Together Max and Andrew have led the museum through a substantial period of change culminating in the launch of the new museum this July following a £6 million capital redevelopment. They have established the museum as an organisation of national importance, drawing praise and recognition from press, industry and audiences, welcoming in thousands of new visitors to the museum during challenging times. Their mission to be a place to connect, sharing Jewish stories with the world to enable us to recognise there is more that binds us together than separates us, sits central to their united vision that underpins the entire organisation.

After over 10 years of planning and seeing the new museum through from conception to opening its doors, both Max and Andrew felt that the time was right to open the doors for someone new to come in and grow the museum as it undertakes the next exciting stage of its journey.

Recruitment for the new permanent Chief Executive position has now opened via the museum’s website, deadline Monday 17 January 2022. Existing museum staff member Gareth Redston will be stepping up as Interim Chief Executive from their position as Head of Programmes. They will steer the organisation through a crucial few months whilst the new position is appointed.

Existing trustee Richard Chapman QC will act as Interim Chair of the Board of Trustees whilst the position is advertised and recruited for in early 2022 along with a number of other Trustee roles. The museum encourages applicants from all backgrounds to apply for all roles at the museum at what feels like an incredibly exciting time.

Max Dunbar: “Leaving after so many years was never going to be easy, but now the new building is open and, I’m delighted to say, buzzing with activity, it feels like the right time to step aside and let someone new lead this incredible organisation into the future. I am excited to continue to support Manchester’s cultural organisations at the University of Manchester in my new role.

It has been a privilege to lead the museum during its transformation and through such an important period of its history. I am so proud of everything we have achieved and want to express my profound gratitude to our supporters, our contractors, our trustees, our visitors and most of all the staff and volunteers at the museum. They have all shaped what the museum is today and made us an invaluable and rich contribution to the history and culture of this great city.”

Andrew Singer QC: “It certainly was difficult for me to step down after serving as a trustee and chairing the board through these crucial last few years. To see the new museum open and impressing so many visitors coming through our doors fills me with enormous pride and gratitude for the efforts of so many people and supporters. The new Chief Executive and Chair will have a really exciting opportunity to grow and build upon the vision that Max and his team have begun and I feel that the future of Manchester Jewish Museum is bright.”

Sir Nicholas Serota CH, Chair of Arts Council England: “Manchester Jewish Museum has been an invigorating addition to Arts Council England’s National Portfolio. Their aim to be a place of connection and change underpins everything they do, from their exciting opening programme to their exhibition sharing the stories of Jewish Manchester with the world, and even their café menu. The ambition to realise the potential of the museum by completing a major capital development has been a fine example of how an organisation can respond to the needs of its communities. Max Dunbar and Andrew Singer have made an enduring addition to Manchester’s cultural offering, and the city is all the richer for it.”

Hidden heritage of Manchester woodlands to be revealed