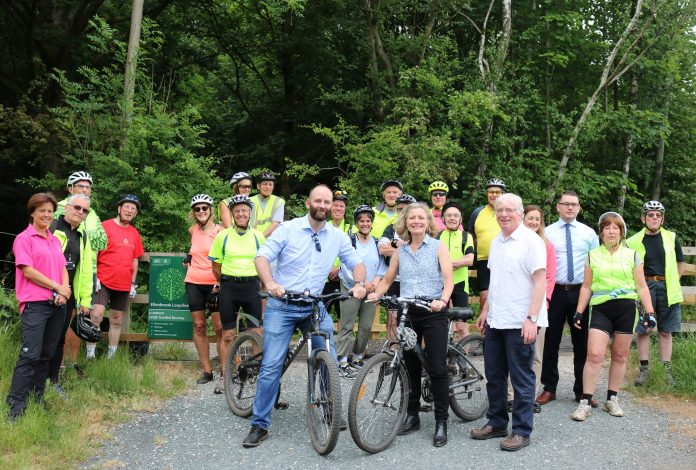 One of the UK’s top environmentalists has been taken on  guided tour of Salford’s £52.4 million worth of green investments .

Emma Howard Boyd, Chair of the Environment Agency and a keen cyclist, visited six sites across Salford to see how the city’s ‘green revolution’ is tackling climate change and benefiting local people.

The sites are just some of the ‘green developments’ in the booming city, including the £3.2 million Carbon Landscape project which is restoring wetlands, improving access and reconnecting communities with their landscape across Salford, Wigan and Warrington.

She also toured the £44 million site of the fifth national RHS garden, RHS Garden Bridgewater and officially re-opened the newly refurbished Ellenbrook loopline, part of a 28 kilometre network of green, traffic free walking, cycling and commuter routes being enhanced across the city.

Earlier in the year, alongside City Mayor Paul Dennett, Emma opened a £10 million flood scheme, jointly completed by council and the Environment Agency, which will protect almost 2,000 homes and businesses, hold more than 250 Olympic-sized swimming pools of water during a flood and includes more than 5 hectares of urban wetland habitat.

Councillor Derek Antrobus, lead member for planning and sustainable development, said: “We have an incredible amount of green investment currently taking place in Salford and we’re delighted to welcome Emma here for a day to see some of our wide range of projects. A key one was the £10 million second flood basin and wetland which the council and Environment Agency jointly completed.

“Emma is a keen cyclist who once cycled from Land’s End to John O Groats so we will be showing her projects which open up new cycle routes for local people as well as ones which tie in with her ‘day job’ – that of managing flooding and climate change.”

Emma Howard Boyd, said: “Climate change is one of the biggest global threats we face. Our thinking in tackling it has to change faster than the climate so it’s great to see, first-hand, Salford’s work in making the city greener, more resilient and ‘climate ready’. The Environment Agency continues to work hard across the North West – earlier in the year we opened the Salford flood scheme – so it’s been inspiring to see yet more partnership-led projects which will benefit both people and the environment.”

Emma started her visit at Little Woolden Moss in Irlam,– a former peat extraction site now being restored to lowland raised bog habitat by the Lancashire Wildlife Trust. Salford’s mosslands are part of a five year restoration project, which extends into Wigan and Warrington, and will open up the countryside for local communities to enjoy.

Anna Hetterley, Carbon Landscape Programme Manager, said: “The Carbon Landscape is changing the way in which we approach landscapes and communities in Salford, Wigan, and Warrington. Twenty-two interlinked projects will provide a forward-thinking and effective programme that will have lasting benefits for local communities and wildlife. The Carbon Landscape will enhance and connect up the restoration of this landscape, altered by industry, creating and improving nationally significant habitats and reconnecting local people with the heritage and wealth of opportunities for enjoyment and learning on their doorstep.”

One of the projects, in East Ordsall Lane, recreates the way undeveloped land would naturally drain. Sustainable urban drainage schemes (SuDS) capture heavy rainfall and allow it to soak into the ground, filtering out pollution and watering the trees rather than going straight into and possibly overwhelming the drains in the area.

Nature-lovers across Lancashire, Greater Manchester and the Liverpool City Region are being invited to...