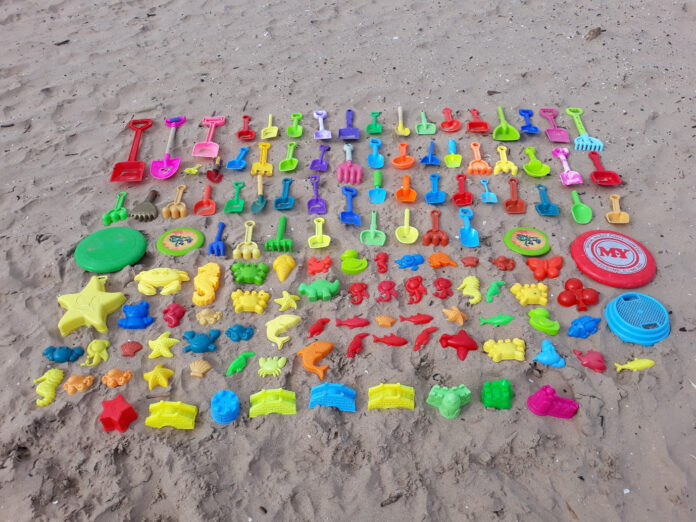 In just three months, the St Annes LOVEmyBEACH volunteers have collected an astonishing 133 plastic beach toys that were left on the beach.

The volunteers collect the toys, alongside other litter, to prevent them from entering the ocean and harming marine life. Rather than send the toys to landfill, they have been cleaned and donated to a local charity, Park View 4U, to extend their life and put the items to good use.

The St Annes North Beach Care group noticed two summers ago, how many toys they were collecting during their weekly beach cleans. Almost all remained in perfect working order and had no reason to be disposed of.

Michael Pearson, group leader said: “Rather than add to the growing amount of waste heading to landfill, we decided to save the buckets, spades and plastic shapes knowing they could be reused. It is a joint effort between the two beach clean groups in St Annes and we are very happy to support local charities working with children.”

Last year the toys were donated to Lancashire Wildlife Trust and this year to Park View 4U, as both charities work with children on environmental projects.

Emily Parr, Fylde BeachCare Officer commented: “Unfortunately for the environment, a set of plastic beach toys can be picked up very cheaply at a pound store. Many families now seem to view taking the toys home as an inconvenience, instead choosing to leave them behind on the beach. Our concern is that people are viewing them as a disposable, single use item, rather than something that should be saved for future beach visits.”

Plastic buckets, spades and toys are made of PVC, a type of plastic which is difficult to recycle and could take up over 450 years to break down in landfill.

Dave Foreman, St Annes North volunteer added: “It’s not only the toys themselves that are a problem, they all come wrapped in further plastic and we are frequently picking up the netted packaging and tags that have been ripped off and left.”

The LOVEmyBEACH message for beach users is simple, when you visit the beach leave only footprints. This not only means dispose of you litter responsibly, but also take away any items which can be reused or recycled.