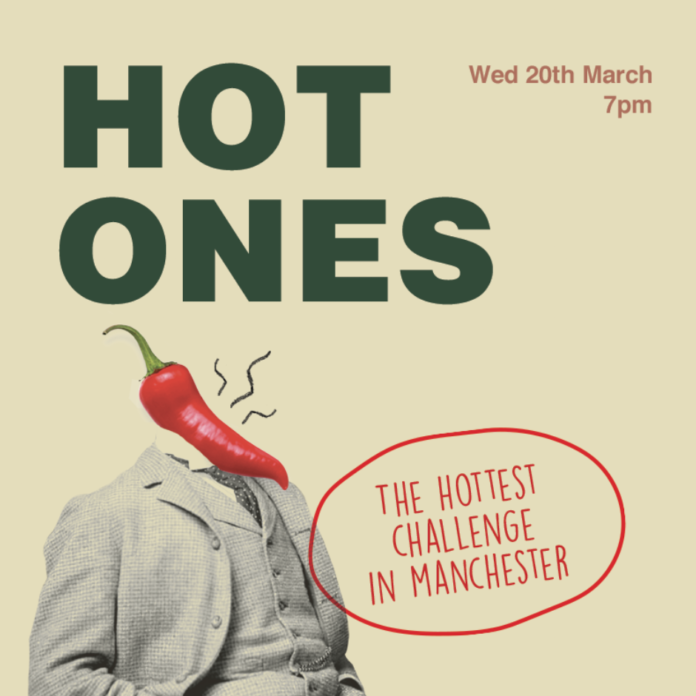 This National Chilli Day, BAB in the Northern Quarter announces its first ever chilli-eating event, based on the YouTube hit show Hot Ones.

Inspired by the US show where Shaun Evans asks well-known celebrities such as Gordon Ramsay and Tommy Chong hot questions with even hotter wings – the team behind BAB is excited to announce the UK’s first Hot Ones event will be held at the NQ restaurant on Wednesday March 20th at 7.30pm.

Those brave enough to sign up will be asked to taste a number of plain skewers paired with extra hot sauces, specifically made for only the biggest lovers of spice. The restaurant will also be providing glasses of milk to help every participant get their mouths back to normal temperatures after the contest.

Participants will walk-away with their very own fact-sheet and badge of honour, forever proving that they have taken part in the hottest challenge Manchester has seen.

BAB’s Hot Ones event will showcase a lineup of 10 hot sauces that have appeared throughout the 8-seasons, including Da Bomb and The Last Dab. Their host, Frank Jay, from Chilli-Shop Leeds, will be showcasing chillies from all over the world, tried by celebrities on the popular YouTube show. Highlights will include Le Dab (containing Pepper X) which can’t be bought in the UK and is an exclusive sauce from the Hot Ones Youtube Show.

Tickets for those wishing to take part are £20 with limited availability. Each one includes 10 skewers – veggie and meat available, 10 hot sauces and a glass of milk. Spectator tickets are £5 per head and must be booked in advance by calling the restaurant on 0161 806 0813 orinfo@babnq.co.uk.

Eat Out to Help Out at Trafford Centre

Life’s a Beach at the Great Northern Warehouse