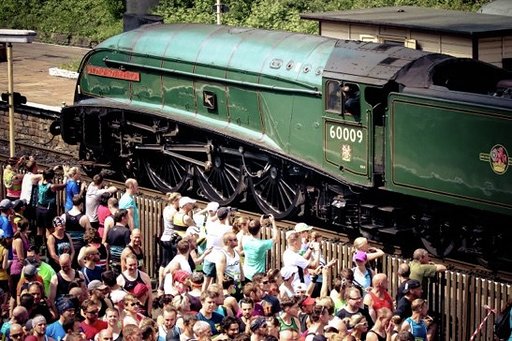 Can a person run faster than a steam train? Find out this weekend as runners test their race pace by pitting themselves against one of the East Lancashire Railway’s steam trains for the annual “Race the Train” event.

Runners will compete against a heritage engine along the 11-mile route from Bury Bolton Street Station to Rawtenstall Station during the annual clash of human versus machine.

A train whistle will signal the departure of the heritage steam train at 10:55, heading south to the next station, where it will change tracks, keeping pace with the runners.

Supporters are encouraged to buy a train ticket and cheer on the runners whilst they journey along the line. It’s anticipated that the train will take around an hour and 40 minutes to complete the route, travelling at approximately nine miles per hour.

Prizes will be given to the top three male and female runners and the first runners in various age categories.

The East Lancashire Railway will be running standard fares and timetables on the day. For more information and to book tickets, visit the Timetables & Fares page at: http://www.eastlancsrailway.org.uk/

A Free festival of street theatre and music for everyone

Manchester’s Beach is Back