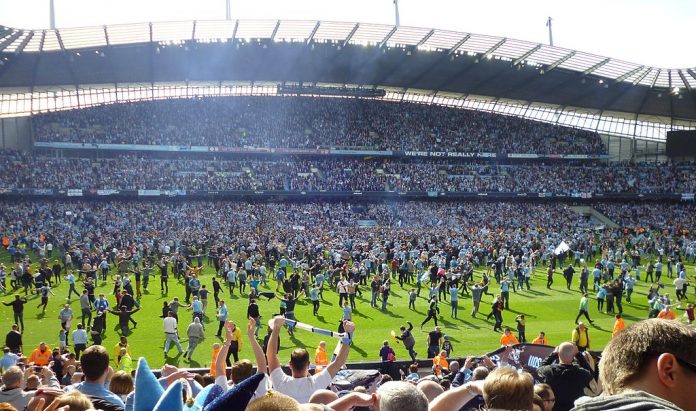 As I sat down to plan this article, my initial question was whether Manchester City could better Arsenal’s Invincibles season of 2003-04. Yet after City’s recent 4-3 defeat to Liverpool at Anfield, the answer to that question is clearly ‘no’.

But with talk of a quadruple, could they go even better than an undefeated league season?

City are still competing in four competitions: the Premier League, FA Cup, Champions League and League Cup. By winning all every one of these, Guardiola’s men would truly cement their place in history as the best English team to ever play the game. The feat would be doubly sweet considering that it would knock bitter local rivals, Manchester United, off their perch.

While they’ve arguably already got the league wrapped up, do City have what it takes to win all four competitions? Let’s take a closer look…

Signs City can win the quadruple

City arguably have the best squad in the Premier League. While they show the odd defensive weakness, the team is full of quality in almost every position. While Gabriel Jesus leads the line, Sergio Aguero sits on the bench (or vice versa) – this alone shows the enormous attacking quality City have. Then there’s David Silva and Kevin De Bruyne – without doubt two of the league’s best midfielders.

At the time of writing, City top the league with a double-digit lead over second-paced United. Meanwhile, an 18-game winning run set a new league record. Guardiola’s men also topped Champions League Group F, have reached the final of the League Cup and are still in the FA Cup.

While pundits have said they’re playing the Premier League’s best-ever football, they also impress on the European stage; Napoli coach, Maurizio Sarri, branded City “the best team in Europe” a few months ago. And considering Real Madrid’s loss of form, he could be right.

Guardiola has been asked many times about the possibility of winning the quadruple and each time he has dismissed the idea. While there’s no doubt City have a great squad and look unbeatable at times, the manager is right when he says that City just don’t have enough players to perform at the same level in every competition.

Jesus and De Bruyne were recently injured and, despite the depth in quality, their absences caused City a few issues. Despite appearances, the City players are only human and it would surely take a miracle to win three trophies, let alone four.

City have a wealth of attacking talent and this makes them marvellous to watch. But as a team they are slightly unbalanced. Without Vincent Kompany, City are weaker in defence than Arsenal were in 2003-04; they may even be weaker in defence than United at the moment. Without this balance and without 10-11 more players in their squad, it’s doubtful that City can win everything going.

Image By Oldelpaso (Own work) [CC BY-SA 3.0], via Wikimedia Commons