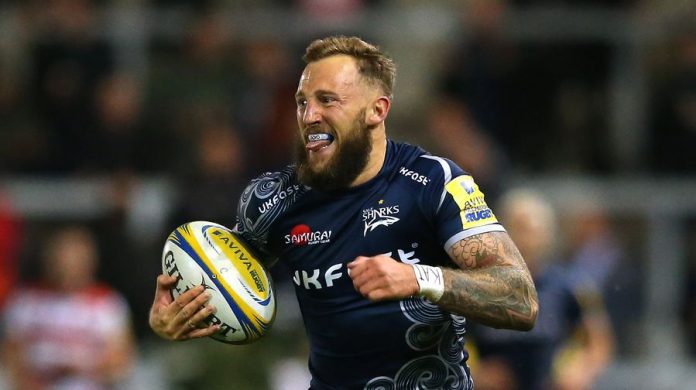 Sale Sharks winger Byron McGuigan has hailed the role of his Sale Sharks team-mates after being named in Scotland’s Six Nations squad.

Byron was this week named by Scotland head coach Gregor Townsend in a 40-man squad for the forthcoming Six Nations showpiece.

The 28-year-old has been in superb form for the Sharks this season, having scored eight tries to date in the Premiership.

His fine form earned him a call-up to the Scotland squad for last Autumn’s internationals where he produced a man-of-the-match display on his full Test debut against Australia, scoring two tries.

Now Byron’s continued excellent form has been recognised once again at international level and he says the role of his Sale team-mates and coaching staff has been key to his latest Scotland recognition.

“The Six Nations is one of the greatest tournaments in the world. I watched it when I was growing up and it’s crazy to think that I was sitting at home watching it with my Mum and we both used to cheer on Scotland – now I’m going to be part of the Six Nations squad. It’s just fantastic,” Byron reflected.

“And I couldn’t have done any of it without the team-mates around me. We’ve got a great bunch of guys and good players on the pitch and they make my job easy here at Sale so they deserve huge credit.