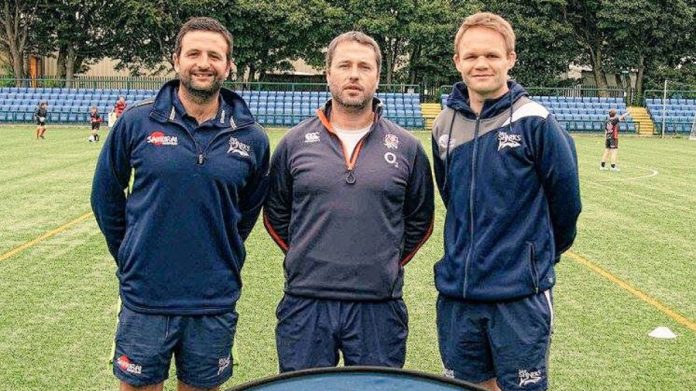 Sale Sharks Academy have recently launched their Developing Player Programme (DPP) on the Isle of Man to increase their catchment and development of young players within the region.

The Developing Player Programme (DPP) is the first stage on the player pathway towards the professional game and focuses on player development of core skill, athleticism and game understanding between the ages 13-16.

As well as identifying players with the potential to progress on the player pathway the programme will support the development of rugby on the island and will be led by RFU Rugby Development Officer (RDO) Chris Brannigan.
The Sale Sharks Academy coaches have recently returned from conducting player assessments with u14-16 players who have been nominated by their school/club.
Academy Coach Noel Speed comments:
“There are a large number of players that have progressed through the academy pathway that have come from the Isle of Man, including a number in our current under 18 squad. The centre will follow the same programme, curriculum and format as our current 6 sites based across the North West and will be regularly visited by the Academy coaches as well as giving players the opportunity to come over and take part in Academy sessions based at Carrington. The opportunity to increase our catchment is an exciting one and we look forward to working with Chris and his coaches to develop young players and offer them increased opportunities to access the academy player pathway’.

‘”The impact on rugby development in having a DPP centre here on the Isle of Man will be huge, both on & off the pitch. It is a big step for our rugby mad island & one that provides an opportunity for not just players, but coaches & clubs also. The programme will see over 90 players attend monthly developmental sessions right here in the Isle of Man. It has also provided us with the opportunity to upskill 11 of our island based Coaches to deliver on the DPP to a Sale Sharks DPP standard, achieved through face-to-face training with the Sale staff & myself. I am sure Sale will be pleased with the talent they see come from the island & hope that this relationship can be maximised for both parties, as we would love to see more Manx boys like Bevan Rodd, George Blackwell, Nathan Pope breakthrough into the Sharks 18s & beyond.”