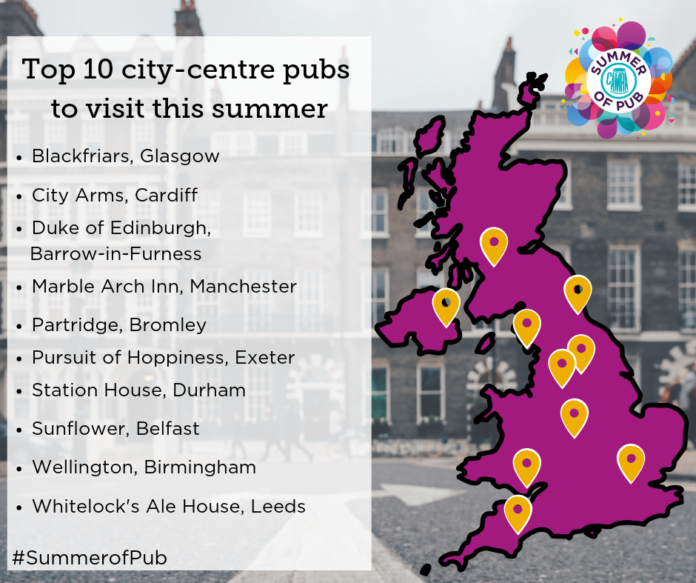 The pubs are unique drinking holes which offer something to quench everyone’s thirst, even in the heart of the city centre. From micropubs to music venues, there’s something to suit all tastes.

The recommendations form part of CAMRA’s Summer of Pub campaign, which has seen hundreds of pubs organise events to showcase what they have to offer, ranging from special screenings of the Women’s World Cup to quiz nights and theatre events. In return, CAMRA’s nearly 200,000 members have galvanised to publicise and promote events within their local communities.

Ben Wilkinson, CAMRA’s National Director said: “These selected pubs demonstrate what is so special about Britain’s pub scene. You don’t have to be situated in the countryside to get a fantastic community pub or a great view – you can find history and heritage in our city-centre bars as well. From Grade-II listed pubs to bustling micropubs and music venues, each of the below offers something to celebrate.

“While most people value the role community pubs play, not everyone is aware of the huge financial pressures that they face and the threats to their survival. Our Summer of Pub campaign aims to show what pubs have to offer and remind people how important the great British pub is to communities. From special screenings of the Women’s World Cup to comedy evenings, beer tastings or special talks, pubs have pulled out all the stops to celebrate this summer and provide something for everyone.”

To find more pub events and a map of activity, simply visit www.camra.org.uk/summerofpub/

From Crumpsall To Krakow – A Guide To Poland’s Medieval City