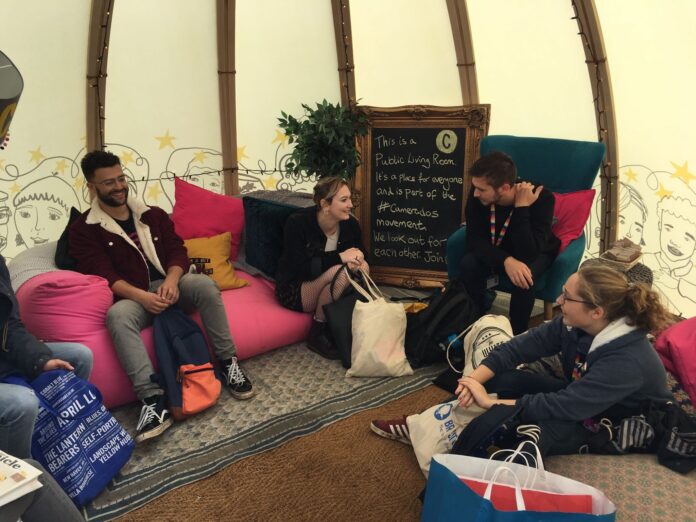 Marple Public Living Room is relaunching on the 24th and 25th July in Marple Methodist Church!

It will be open every Thursday from 10am-12pm and is part of a network of Public Living Rooms across the country. Public Living Rooms are open to everyone and set up by local people who are part of the Camerados movement. Camerados believe that we can get through tough times better, by looking out for each other in a more human way.

Public Living Rooms are spaces for folk to be alongside each other during the good times and the tough. They are places to meet new people, have a chat and a cuppa with no agendas and no fixing. Because sometimes it’s easier to chat to a stranger in the moment, than someone you know.

The Marple Methodist Church is a space used by a variety of community groups in Marple, including local Camerados who have set up the Public Living Room. The Festival of Hope is a weekend to find out about what is going on in Marple and get involved in the community.

Camerados is a growing movement of people from Baltimore to Blackpool who look out for each other in person and online. Anyone can be a camerado, it’s a behaviour thing. Being a camerado is about how you live on a daily basis and it’s based on six principles that help folk be alongside each other and get through tough times.

Camerados founder, Maff Potts believes that, “The public realm is divided into two types of places: places that sell you stuff and places that fix you. What if there was an agenda-free, no outcomes place where you had permission to be rubbish? It’s amazing what happens when you come in without the intention of trying to fix people. People often have the answers themselves.”

The first Public Living Room was set up in Sheffield in 2016. Since then folk have been setting them up in their communities across the UK and the world. From hospitals to universities, from prisons to libraries and community centres to cafes. Over this time, thousands of people have benefitted from connecting and looking out for each other.