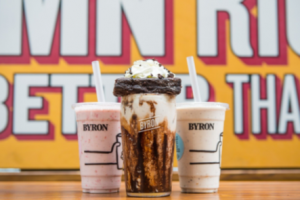 Particularly with this super-hot weather, which at the moment is showing no signs of cooling down, what could possibly better than one of Byron’s signature extra-thick milkshakes? And now vegans can indulge in them too, the burger restaurant are trialling a new collection of shakes, all of which are dairy-free and vegan-friendly, but still packed with sensational taste.

For now, the new milkshakes will be available at Byron’s Manchester, Shoreditch, Camden, Oxford Circus and Islington restaurants. The shakes follow the highly successful launch of Byron’s vegetarian and vegan burgers earlier this year, which provides a great choice for an increasingly diverse dining scene.

Paul Mason, Head of Food at Byron said “Since the launch of our new menu, we’re now seeing one in ten customers choosing one of our vegan or vegetarian burgers. The feedback we kept hearing was that our non-dairy drinking fans longed for vegan versions of our extra-thick shakes, so these new additions to the menu means that nobody need miss out.”