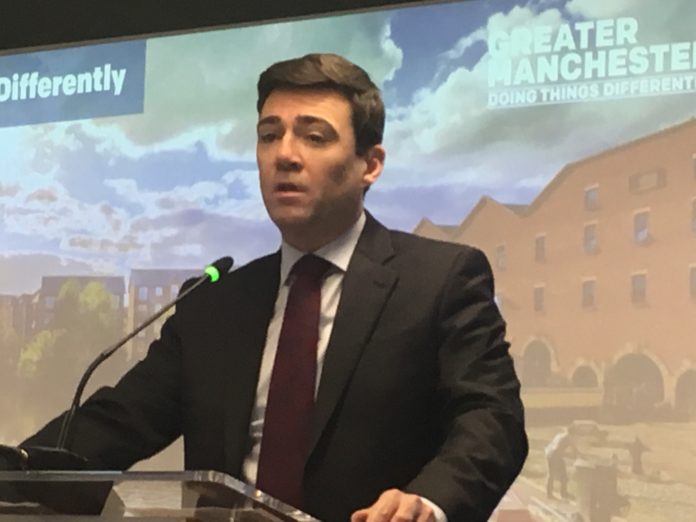 The Mayor of Greater Manchester Andy Burnham promised a city region where prosperity, opportunity, health, hope and happiness are widely and fairly shared across all our people and places.

Launching the Combined Authority’s much delayed Spatial and Plannng Framework, he promised that at a time of national uncertainty, Greater Manchester is starting the year with confidence and a clear, united statement about its future direction.

His vision was of a place where:

”Where everyone has a secure job and safe home,Where young people are supported to have high ambitions and older people can live life to the full, Where we catch people if they fall and no-one is forced to sleep on our streets. And where, crucially, everyone has green space to enjoy and clean air to breathe. These are big ambitions which require big decisions and big changes and we are ready to make them.”

adding that once if you wanted to get somewhere with your  life, you once had to move to London, now this plan means that you won’t have to leave the region,everything you need to get on should be on your doorstep

The Spatial framework was initially meant to be published in 2017 but with the election of  Burnham as the region’s first elected Mayor, it was ripped up and put back to the people in a so called ground up conversation.

The criticisms of the first plan were that it was too dependent on road transport, used up too many green belt spaces and would not deliver affordable homes

The new plan, said the Mayor takes a brownfield approach to plannng, cuts fifty per cent of green belt which was identified in the original plan and well as enhancing the protection of sixty per cent.

“By focusing on higher density and town centres, the green belt has been protected” said the Mayor.

“foresees a new future for the proud towns that circle this great city; as residential rather than retail centres; good living centres with flexible workspace, quality public realm, public transport and cycle-ways.”

“Just as this city pioneered city-centre living 20 years ago he added, “ so we will now show how our towns can provide the modern, affordable homes we need for young and old alike.
These new communities will breathe new life into our towns, filling redundant space with a new leisure and cultural offer.

The new vision contains a new commitment to build fifty thousand affordable homes, three fifths of them social housing but it will also tackle the failing of the private rented sector and a Greater Manchester rental scheme will drive out unscrupulous private landlords,

As for transport, there are sixty five schemes on the table, which we are promised will see a much closer link between housing and public transport, and a new profile park and ride scheme will be launched as the new Trafford Park line

Levels of air pollution will be addressed by the introduction of a new category C emissions zone, which will see a penalty scheme for non compliant vehicles though this will not apply to vehicles already registered in Greater Manchester, eighty per cent which already comply.

It is said Burnham,”the poorest kids in the poorest communities who are today breathing in the most polluted air.
We have a moral obligation to act to improve their health and early development.”

The clean air plan is part of a radical new environmental policy for Greater Manchester while there will be a deadline of 2028 for all new development here to be zero-carbon and a new GM-wide policy of opposition to fracking.

”By embracing the future ahead of other areas, we will not only clean up our air and our environment, we will can become a global leader in the green, clean economy.
There is no reason why the place which led the first industrial revolution cannot lead the fourth.”