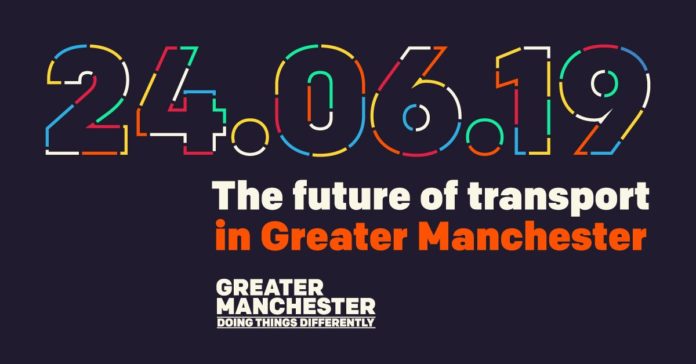 The Mayor of Greater Manchester, Andy Burnham, has launched Our Network, his ten-year plan to create an integrated, modern and accessible public transport system.

The Mayor outlined the projects and policies he intends to implement to create a world-class public transport system for the people of Greater Manchester, accompanied by an animated map that shows how public transport connections across the city-region will grow and develop in four phases over the next decade.

Our Network will be an integrated, simple and convenient London-style transport system; allowing people to change easily between different modes of transport; with simple affordable ticketing and an aspiration to have a London-style cap across all modes; with orbital routes that allow people to travel around the city region, as well as in and out of the city centre.

Cycling and walking and bus will be accessible and convenient for short journeys, with interchanges and transport hubs enabling people to easily transfer to tram or train for longer journeys.

The Mayor announced a key milestone in Greater Manchester’s bus reform journey, as an assessment into the future of the city-region’s bus market has now been completed and recommends franchising as its preferred option.

The assessment will be considered by the Greater Manchester Combined Authority on Friday 28 June.

Greater Manchester is the first city-region seeking to make use of the new powers under the Bus Services Act 2017 and the first to test this legislation – so is leading the way nationally in this regard.

The Mayor also announced that as a part of the integrated transport system, contactless payment will launch shortly on Metrolink, a new bike hire scheme including electric bikes will be launched in 2020, expanded Park and Ride schemes at transport hubs and innovative partnerships with Google that will improve travel information and advice.

The Mayor also called on the government to devolve the required funding and powers, as recommended by the National Infrastructure Commission, to deliver the projects and close the gap in transport funding between the north and the south.

Andy Burnham, the Mayor of Greater Manchester said: “Our current public transport system is fragmented and unreliable, with often confusing ticketing and passenger information. A truly integrated transport network has the potential to transform Greater Manchester. By allowing people to easily and quickly move around our city-region we can unlock growth, cut congestion and air pollution and enable our residents to lead fulfilling and rewarding lives.

“That is why today I have launched Our Network, a vision for a cohesive and seamless single system that brings together all the different ways people travel in our city-region.

“An important part of this is reforming our bus market. We’ve reached a key milestone with the completion of the assessment into the future of Greater Manchester’s bus market, which recommends franchising as its preferred option and to be considered further by the GMCA. We’re the first city-region seeking to make use of the new powers under the Bus Services Act and the first to test this legislation – so are leading the way nationally in this regard.

“Other vital parts of our integrated transport network will include more trams, a new bike hire scheme, free bus travel for 16-to-18-year olds, contactless payment on Metrolink, expanded Park and Ride, pathfinder tram-train projects and setting out our ambition for GM Rail.

“To achieve our full transport ambition, Greater Manchester needs the infrastructure and the necessary political powers. For too long, central government has over promised and under delivered when it comes to the North. If the next government is serious about closing the North-South divide, a critical step forward will be empowering us with the necessary powers and funding to improve our transport. I will be making this case strongly in the next Spending Review on behalf of the people and businesses of Greater Manchester.”