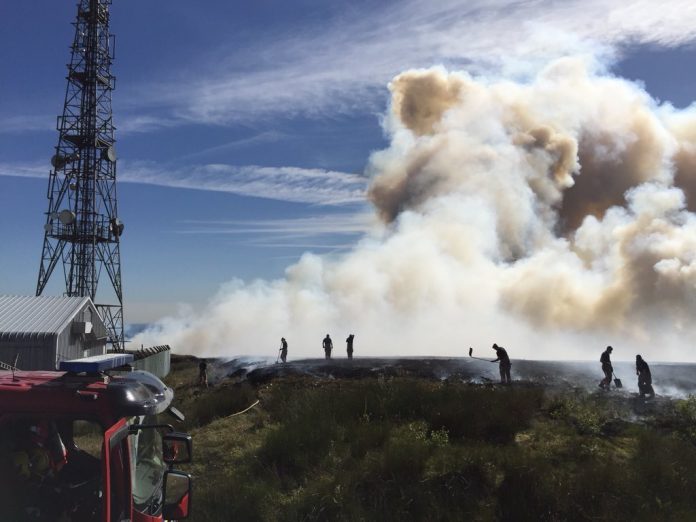 Mayor of Greater Manchester Andy Burnham has appealed for the government to take a closer interest in the moorland fires as he visited the scene at Winter Hill this morning.

Mr Burnham said he would be seeking to speak with Home Secretary Sajid Javid “to relay what I’ve seen and ask the government to take a closer interest in what is happening here”.

“The firefighters have been doing a magnificent job… but what I take away from being here is that they need more support, possibly air support,” he added.

“This remains a challenging situation and we need to ensure that all necessary resources are made available.”

As of Monday morning there are twelve fire crews plus specialist appliances at moorland fires in Tameside and ten at Winter Hill supporting Lancashire Fire and Rescue Service who had a further fourteen fire engines on the scene, along with two from Tyne and Wear.

Both services have been supported by fire and rescue colleagues from other services and British Army troops remain on the moors in Tameside, with support currently available until tomorrow. Fire crews from across the UK will be travelling up to Greater Manchester throughout the day to provide further support.

Assistant County Fire Officer, Dave Keelan, told the media on Monday morning: “Crews are working in extremely difficult and challenging circumstances. It’s not just the weather that’s difficult but also the geography of the site – getting the equipment, the firefighters and the water up to where the firefighters are is really challenging. But I can’t praise crews enough – they’ve done a fantastic job and are working so hard.

“It’s really challenging to have resources across two major incidents in Greater Manchester whilst trying to maintain business as usual but we have been extremely fortunate and I thank colleagues from up and down the country who have sent fire engines and officers to support us and also the military who have done a fantastic job supporting us.

“We don’t know the cause of the Tameside incident yet. We have a team of fire investigators doing some work on that but I would just like to urge the public to be really careful with discarded cigarettes and glass bottles – none of us want to destroy the wildlife and the natural beauty that we have got around us in Greater Manchester so if the public can take extra care when they are out and about in areas like this it would be much appreciated.”

New report says almost half of all historic mills in Greater Manchester have been...