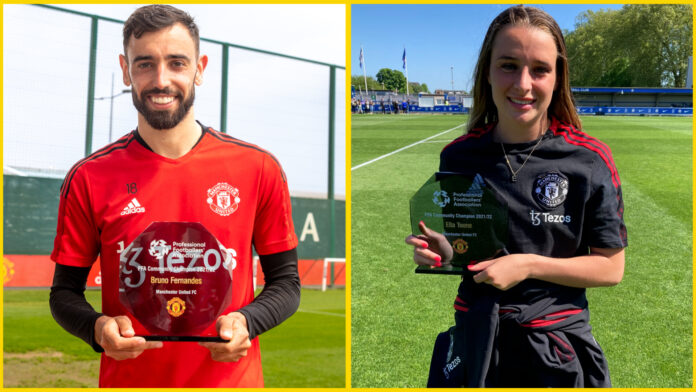 Bruno Fernandes and Ella Toone have been awarded the PFA’s Community Champion award by Manchester United Foundation, for their ongoing support of the local community throughout the 2021/22 season.

Over the course of the season, both players have been recognised for their contribution to the local community in spreading positive messages, meeting with participants, and raising awareness of the Foundation’s work in the local areas.

Bruno Fernandes was nominated for the award after taking part in a variety of Foundation activations throughout the season, including packing gifts and sending virtual messages of support to patients and staff at local children’s hospitals at Christmas. Bruno has also frequently been involved in meet-and-greets, most recently with a group of primary school pupils at Carrington.

In January, Bruno took part in a virtual Q&A with 17-year-old Stefan from the Foundation’s BTEC Sport programme.  The pair shared personal life experiences, whilst Bruno also gave advice on pursuing football and going to university. More recently they were able to meet in person when Stefan presented Bruno with the Community Champion trophy.

“It’s an honour to be recognised as this season’s PFA Community Champion”, said Bruno Fernandes. “Manchester United is not just about football on the pitch, but also giving back to our local communities and inspiring the next generation.

It was brilliant to see Stefan again and hear how he is getting on at college and in football. I’m proud to have worked closely with the Foundation this year and have seen first-hand the impact it can have on the lives of young people across Manchester. I can’t wait to continue this into next season.”

Delighted to meet his hero in real life, Stefan commented, “It as an amazing experience to meet one of the best players in the Premier League. This time it was great to meet him face-to-face; he gave me a lot of advice and motivated me to keep playing and keep pushing on in football. He’s inspired me a lot.”

Manchester United Women midfielder Ella Toone has also been nominated for the award due to her impact on young people this season. Ella sent messages of support to children’s hospitals across Greater Manchester and took part in a surprise football session with primary school children at Old Trafford earlier in the year. In the build-up to the UEFA Women’s Euros in June, Ella also visited a Foundation partner school in Stretford to promote girls’ football and inspire budding young footballers.

When presented with the award, Ella said, “I’m delighted to receive the PFA Community Champion award this season. After working so closely with Manchester United Foundation, I’ve seen how it can directly change the lives of young people for the better.

Being from the local area it’s incredibly rewarding for me to visit and give back to the community I grew up in. I hope by sharing my experiences I can be an example and inspire children for the future.”

Each season players are nominated for going above and beyond in their support of the Foundation and the local communities.

The PFA’s director of corporate social responsibility, John Hudson, added, “The PFA has been immensely proud of the outstanding efforts of players during a very difficult season once again and we feel they should be recognised for their support and involvement in the local community.

The award will hopefully raise awareness of the importance many of our members attach to their roles off the pitch and highlight their commitment to support those most in need during the pandemic. We would like to offer our congratulations to this season’s recipient of the 2021/22 PFA Community Champion Award.”

Government must set out how and when it will lift lockdown restrictions with economic...