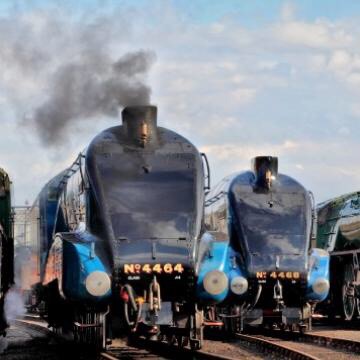 Britain’s only surviving operational railway roundhouse is set for a major revamp after the Heritage Lottery Fund (HLF) confirmed support of £1,170,600.

The money will be used to repair and refurbish Barrow Hill Roundhouse in Derbyshire, transforming it into a nationally important museum.

A new entrance, shop and café will be created alongside new visitor facilities, a dedicated learning and meeting space and a conservation workshop. A wide range of learning, training and skills activities will accompany these developments, ensuring that the Roundhouse can attract a much wider and more diverse audience.

It is hoped that work will start in June this year and be complete by mid 2019.

Mike Kennedy, chair of Barrow Hill Engine Shed Society, said: “We are delighted by the news of our success. The project will enable us to safeguard the roundhouse for future generations, and provide the improved facilities that we need to attract a new audience, while retaining our existing audience of rail enthusiasts.

“It will also provide us with the expertise and equipment to tell the story of the roundhouse and its workforce to a wide range of people, particularly local people including families and schoolchildren.”

Barrow Hill Roundhouse was built in 1870 for the Midland Railway and houses an operational turntable serving 24 radiating roads or tracks. It was used to repair and maintain engines and rolling stock for the Staveley Iron and Coal Company.
As one of the few roundhouses to survive the transition from steam to diesel engines, it operated until the industry went into decline during the 1970s and 80s.

In 1991 it was saved from demolition by local campaigners with just 48 hours to spare and has since become a popular place to visit, primarily for railway enthusiasts. Visitors can currently see a host of rare locomotives and over 4,500 items including tools, lamps, uniforms and photographs.
Now the Engine Shed Society wants to attract local people as well, many of whom are unaware of what is on their doorstep and its history.

The main building also requires urgent attention to make it watertight and prevent the collections from getting damaged. There is also a pressing need to record the memories of people who worked at the site, many of whom are now elderly.

Jonathan Platt, Head of HLF East Midlands, said: “As the last surviving operational roundhouse, Barrow Hill has a unique role in telling the story of the UK’s evocative transport heritage.

“There’s no better way to learn about this history than getting up close to the buildings that survive from that time, so we’re delighted that thanks to National Lottery players we can support this much-needed project to repair the building and enhance visitors’ understanding and enjoyment of the site.”

HLF previously provided a £96,400 development grant in 2014 to work up plans for the project. Now, following a further application, the full grant has been awarded allowing the major works to commence.