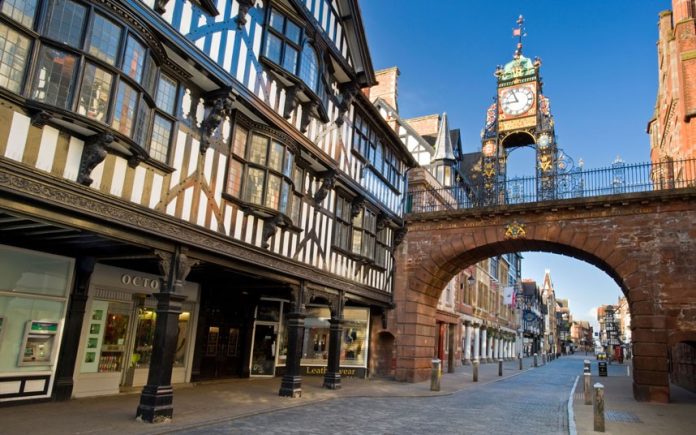 Hidden in streets across the country are the secrets of Britain’s rich and dramatic past. In a brand new series coming to Channel Four this weekend, Professor Alice Roberts studies a key period in British history by telling the story of a single historic town.

From an extraordinary archaeological find hidden under a café in Chester to a near thousand year old Viking poo in York, Britain’s Most Historic Towns uncovers the extraordinary history underpinning well-known towns. In each of the six episodes, Alice visits historic sites and meets local historians to understand how each town was shaped by the dominant forces of the age.

Exploring how people might have lived in each period, Alice attempts to storm a Norman castle, takes a crash course in nineteenth century female etiquette in Victorian Belfast and is subjected to some humiliating Tudor justice in Norwich.

Cutting edge CGI allows Alice to bring long lost monuments back to life while aerial archaeologist Ben Robinson takes to the skies to see how the layout of each town reflects a historical era to this day. At the climax of each programme, vivid CGI reveals the entire historic town in all its former glory.

Episode one features Alice’s explorations into Roman Chester, which include a radical theory that there were once plans for the town to become, not only the capital of Roman Britain, but a staging point for the Roman Empire to invade Ireland. Throughout the series, little-known facts about some of Britain’s best-loved tourism hotspots include, that during Anglo Saxon times, Winchester had been the royal capital of England.

York is home to a thriving Viking heavy metal scene, where traditional rock n roll lyrics are replaced with Viking sagas in old Norse while inTudor times Norwich, the second biggest city at the time, was famed for the ‘Madder Red’ dye that was a popular colour for the clothing of every day folk. One vital ingredient in the production of the dye was human urine that was collected from giant buckets positioned outside the pubs of the city.

Britain’s greatest soldier, The Duke of Wellington, was a regular visitor to Cheltenham’s bath house, where the spa waters were claimed to cure all manner of ailments affecting the heart, liver, kidney and bowels.

A Cheadle Hulme pub and hotel has reopened following a major revamp.