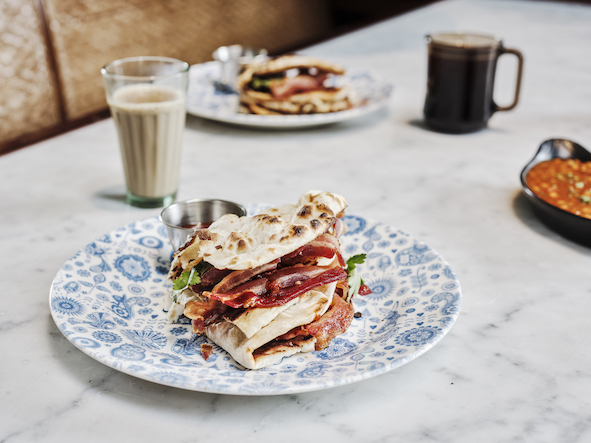 There is something rather regal about going for Breakfast at Manchester’s Dishoom.

Incense burns in the reception,its smell permeates your senses as you are led to the table, at the front of the building in the former Masonic Hall on Bridge Street.
Block out the outside world and you could be transported back to the days of the Raj, dark wood, fans hanging from the high ceiling,portraits of people long deported and stained glass
But then you realise you are in the second decade of the twenty first century, this is a relaxed family friendly location.Families have brought their children for a brunch, a courting couple gaze in each other eyes and a hen party are sat making sure their stomachs are lined for a gruelling day ahead.
In this restaurant which pays homage to Irani cafes that were vital to life in Bombay during the early 20th Century, we are here to sample the latest addition to the brunch menu, elaborately explained to us by the wonderful serving staff, the introduction of new breakfast naan rolls, plant-based makeovers of the classics and the launch of the first-ever weekend feasting menu.
They have introduced two next-level breakfast naans. First up, the new Double Bacon Naan  steps up Dishoom’s cult classic with double the amount of first-rate smoked streaky bacon, crisped and piled high in freshly baked naan, with cream cheese, chilli tomato jam and fresh herbs. Next up, the Wrestler’s Naan Roll.
Named in homage to Koolar & Co.’s wrestler- sized portions, it combines streaky bacon, peppery sausage and runny-yolked egg in fresh naan
Lovers of the original bacon, sausage or egg naan rolls need not fear, they remain a firm favourite and fixture on the new menu, made with top- class produce from Ramsay of Carluke, Maynard’s Farms and Clarence Court, respectively.
Being a vegetarian there was something for me, the veggie sausage wrap, a meal in itself but I couldn’t resist the granola,topped with vanilla yogurt and fresh berries.
I could have chosen the Keema No Eedu a vegan breakfast of fortitude, consisting of spiced soy keema with sali crisp-chips and homemade toasted pau, and Vegan Akuri an eggless version of Dishoom’s spicy breakfast scramble.
Dishoom are also introducing a bountiful weekend feasting menu, bringing together some of their most-loved breakfast dishes, which will be served to share for a most indulgent breakfast feast.
Guests have a choice of alcoholic or non-alcoholic Sparkling Wine, a classic Bloody Mary, or the non-inebriating Virgin Mary, served alongside generous bowls of fruit, yoghurt and homemade granola.
To follow, a platter of sharing naans, Keema Per Eedu (spicy chicken keema studded with morsels of chicken liver, topped with two runny-yolked fried eggs and sali crisp-chips) or bountiful Akuri (eggs, spiced and scrambled), and plentiful helpings of toasted pau (Bombay’s favourite bread buns).
It is venerable fayre, a most enjoyable way to start the weekend in the centre of Manchester and we heartily recommend a visit 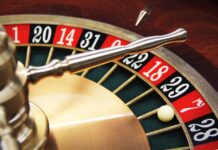 What Are the Most Common Mistakes by Online Casino Newbies?